A City University of Hong Kong (CityU) scientist has received HK$1 million from the Chinese Academy of Sciences (CAS) and the Croucher Foundation to advance his research into a novel technology for the early detection of cancerous cells. 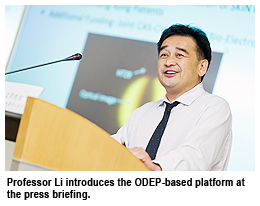 Professor Li Wen Jung from the Department of Mechanical and Biomedical Engineering received the grant from the CAS-Croucher Funding Scheme for Joint Laboratories for his collaborative project “Bio-manipulation and Bio-marking by Optically-induced electrokinetics” in collaboration with the Shenyang Institute of Automation, CAS.
Professor Li’s project was one of the only three new projects to receive funding from the prestigious CAS-Croucher funding scheme this year. The scheme has funded only 20 projects since 2004.
Novel technology is needed for the early detection of cancer because current approaches are not sensitive enough to identify conclusively the few cancerous cells that might exist in one milliliter of blood containing millions of normal cells.
An optically-induced dielectrophoresis (ODEP)-based platform developed by Professor Li causes the cancerous cells in the blood to rotate and move towards an area where a light pattern is projected. “It is like a special magnet pulling on only the cancerous cells while leaving all other cells alone. The cancerous cells are thus easier to spot,” he said.
In the future, medical professionals will be able to collect the cancerous cells for culturing and analysis by drawing blood from the illuminated area of the patient’s body. It is hoped that eventually the ODEP platform will be able to definitively pin-point the source of these cancerous cells and guide the appropriate therapy.

Using this ODEP-based method to differentiate cancerous from normal cells is at least 10 times cheaper and at most 100 times faster than the laser-based optoelectronic tweezers, another leading-edge cell manipulation method. ODEP uses less optical power and allows for the manipulation of hundreds of cells in real time, according to Professor Li, adding that it is more effective than existing nanotechnology-based cancer detection methods which involve complex cell preparation steps.
Professor Li’s team and their medical collaborator from The Chinese University of Hong Kong have been using ODEP to detect skin cancer cells, and the results have been promising. “The pigmented skin cells exhibit a cell-specific rotation phenomenon under a sufficient ODEP force, and this phenomenon could be a very efficient bio-marker to separate pigmented and non-pigmented cells non-intrusively,” he said.
Professor Li’s research team has recently built the first integrated ODEP platform in Hong Kong and China. He and his medical collaborator plan to launch clinical tests in Hong Kong hospitals two to three years later and apply the technology to differentiate other types of cancers, aiming to help doctors detect cancerous cells in blood samples early on.
Under the funding scheme, CityU and the Shenyang Institute of Automation will establish the Joint Laboratory for Bio and Nano Electrokinetics, the first laboratory in the world dedicated to the new and exciting field of electrokinetics-based nano/bio manipulation, separation and assembly. In addition, The Chinese University of Hong Kong and the Affiliated Hospital of Academy of Military Medical Sciences, Beijing, will participate in the project as medical science collaborators.
The CAS-Croucher Funding Scheme encourages researchers in Hong Kong universities and CAS research institutes to work together on highly specific scientific topics with the intention to establish a joint laboratory in the longer term.