A lecture theatre at the Run Run Shaw Creative Media Centre (CMC) at City University of Hong Kong (CityU) has been named the Shun Hing Lecture Theatre in appreciation of the generous support that the Shun Hing Education and Charity Fund has given to the University over the years. The naming ceremony took place on 8 May.

Over the past few decades, student scholarships and grants for innovative research and upgrading campus facilities offered by the Shun Hing Education and Charity Fund have contributed significantly to the development of education in the mainland, Hong Kong and around the world. 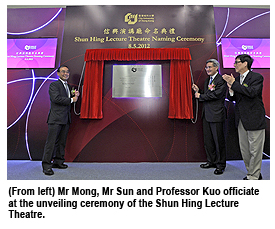 The Fund has helped CityU students broaden their education by funding exchange opportunities and has built a world-class learning and teaching environment at the CMC for the development of creative media education. Disadvantaged CityU students, in particular, have benefited from the Fund’s generosity.

“The Shun Hing Group has become a role model for responsible corporate citizens by contributing enormous efforts to the education of the younger generation for the building of a prosperous society,” said Mr David Sun Tak-kei, Council Chairman of CityU, at the naming ceremony.

“The effort that the Group has put into encouraging talent for the new media and creative industries has boosted the development of the School of Creative Media and the University as a whole,” said Mr Sun, adding his warmest gratitude to Shun Hing and the Mong Family for their kindness and support.

“The Shun Hing Group concurs with the mission of CityU and appreciates the University’s devotion to creative media education,” said Mr David Mong Tak-yeung, Chairman of the Shun Hing Education and Charity Fund, at the ceremony. 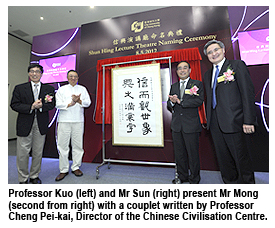 “As a forerunner in professional creative media education, the School of Creative Media at CityU provides programmes that meet the critical need for qualified and multi-talented individuals,” he added.

Professor Way Kuo, President of CityU, expressed his deep thanks to the Fund and Mr Mong. “Generous support from Mr Mong and the Fund has helped to create an inspiring environment for training creative media professionals. The quality of teaching and research in creative media has been greatly enhanced with students winning more than 100 international awards since the School of Creative Media was established.”

“Once again, I thank Mr Mong and the Fund for their unfailing support and their commitment to nurturing the future leaders of society,” he added.

Designed by the internationally renowned architect Mr Daniel Libeskind, the CMC opened last October. It is the permanent home of the School of Creative Media and will also house the Department of Computer Science, Department of English, Department of Media and Communication, and the Centre for Applied Computing and Interactive Media. The 160-square-metre Shun Hing Lecture Theatre located on Level 3 is equipped with a comprehensive multi-media visual and audio system and has a seating capacity of 110.