City University of Hong Kong (CityU) will confer honorary doctoral degrees on Dr Lien Chan, Professor John Forbes Nash, Jr, The Hon Jasper Tsang Yok-sing, and Professor Xu Kuangdi in recognition of their significant contributions to education and the well-being of society. The awards ceremony will be held in November 2011 during the University’s Congregation.

Dr Lien, Honorary Chairman of the Kuomintang, will receive an Honorary Doctor of Social Science. Dr Lien received his bachelor’s degree and doctorate in political science in Taiwan and the US, respectively. He focused on teaching and research for the next decade before starting his political career in 1975 with his appointment as Ambassador to El Salvador at the age of 39. Since then, he has held many important positions in government and the party. He has been Director of the Committee of Youth Affairs; Deputy Secretary-General of the Central Committee, Kuomintang; Commissioner of the National Youth Commission of the Executive Yuan; Minister of Transportation and Communications; Member of the Central Standing Committee, Kuomintang; Vice-Premier of the Executive Yuan; Minister of Foreign Affairs; and Governor of Taiwan Province. He was elected Deputy Chairman of the Kuomintang and made Premier of the Executive Yuan in 1993. He became Vice-President of Taiwan in 1996 and was elected Chairman of the Kuomintang in 2001. Dr Lien is dedicated to promoting the peaceful development of cross-strait relations and enhancing mutual understanding between Chinese people. In 2005, he embarked on the remarkable eight-day “Journey of Peace” to China, meeting Mr Hu Jintao, General Secretary of the Communist Party and President of the People’s Republic of China. It was the first meeting between the top leaders of these two parties since 1945. In addition to his role as Honorary Chairman of the Kuomintang, Dr Lien is Chairman of the Board of Directors of Lien Chan Foundation for Peace and Development.

Nobel Laureate Professor Nash will receive an Honorary Doctor of Science. A legend in the field of game theory, Professor Nash has provided insight into the forces that govern chance and events inside complex systems in daily life. His influential thesis “Non-cooperative Games”, published in Annals of Mathematics when he was only 22, earned him a doctorate at Princeton University. It established the mathematical principles of game theory, a branch of mathematics that examines rivalries among competitors with mixed interests. Known as the Nash equilibrium, his theory attempted to explain the dynamics of threat and action among competitors. It has been widely applied by business strategists and helpful to evolutionary biologists and social scientists. He was awarded the 1994 Nobel Prize in Economic Sciences as a result of his work in game theory, alongside Hungarian-American economist Professor John Harsanyi and German mathematician Professor Reinhard Selten. He is also the recipient of the John von Neumann Theory Prize and the Leroy P. Steele Prize. He is now Senior Research Mathematician in the Department of Mathematics at Princeton University. 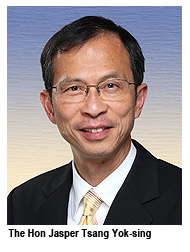 Mr Tsang, President of the Legislative Council (Legco) of the HKSAR, will receive an Honorary Doctor of Laws. A legislator since 1998, he was elected as President of Legco in 2008. He has been committed to serving Hong Kong since he graduated from university, working as a secondary school teacher for 28 years. He was a Council Member of the Open University of Hong Kong and a Member of the Standing Committee on Language Education and Research. Despite his heavy workload at Legco, he is the Supervisor of Pui Kiu College and Pui Kiu Middle School, and Manager of Pui Kiu Primary School. Mr Tsang actively participates in Hong Kong’s political affairs. In 1992 he helped found the Democratic Alliance for the Betterment and Progress of Hong Kong, acting as Chairman from 1992-2003. He has served as a Non-official Member of the Executive Council of the HKSAR; a Board Member of the Airport Authority; a non-executive Director at the Securities and Futures Commission; a Member of the Independent Commission Against Corruption Complaints Committee. He is currently a Member of the National Committee of the Chinese People’s Political Consultative Conference. In 2002, Mr Tsang was awarded the Gold Bauhinia Star by the HKSAR Government. 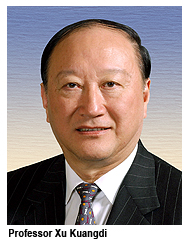 Professor Xu, Honorary Chairman of the Chinese Academy of Engineering (CAE), will receive an Honorary Doctor in Engineering. He is an internationally renowned engineer in metallurgy. In the early 1980s, he worked as deputy chief engineer and technical manager for a Swedish injection metallurgy corporation and developed innovative ideas in metallurgy. Professor Xu is an Academician of CAE and a Foreign Member of academies of engineering in Australia, Russia, Serbia, Sweden, the UK, and the US. Professor Xu significantly advanced engineering technology in China when he was the President of CAE from 2002 to 2010. He has received Sweden’s Grand Cross Medal of the Polar Star and the International Medal of the Sweden Chamber of Commerce; the China Europe Friendship Award at the Hamburg Summit, the German-Chinese Friendship Award, the Grand Cross of the Order of Merit of the Federal Republic of Germany; the British Chamber of Commerce China Link Achievements Award, the International Medal of the Royal Academy of Engineering, UK; and the Prize for Scientific and Technological Progress of Ho Leung Ho Lee Foundation in China. Professor Xu has served in many national positions. He was the Mayor of Shanghai, Vice Chairman of the 10th National Committee of the Chinese People’s Political Consultative Conference, and Deputy Director of the State Council Academic Degrees Committee.