A distinguished alumnus has offered his support to the proposed school of veterinary medicine at City University of Hong Kong (CityU).

He suggested that part of his donation be used to help establish the proposed school.

The event marked the second time that CityU has named its facilities after members of Mr Fan’s family, showing that Mr Fan’s family shares the same sense of duty and set of qualities.

Mrs Connie Fan Pang Yee-man is a model of a traditional Chinese mother. She has the virtue of endless love for her children, takes good care of her children, and encourages them to study hard. She has been a good example of an enthusiastic learner, deeply influencing Mr Fan.

“As the most important family member in my life, my mother has supported me strongly during my studies and work. In particular, she encouraged me to complete my bachelor’s degree at City Polytechnic (now CityU), which served as a launch pad for my career. All my achievements today are due to her encouragement and advice. My mother is a pillar in my life,” Mr Fan said. “She became my mother when I was 12 and took up the responsibility of taking care of me and my sister - this required unprecedented dedication and courage for a young lady who was only 24 back then. There is an unspoken rapport between us and I deeply appreciate her guidance. ” 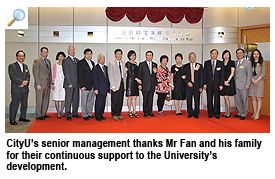 The naming ceremony was held on the same day as Mrs Fan’s 60th birthday. Accompanying his mother to the ceremony, Mr Fan said he was delighted to see his family tied with CityU, his second home.

“My parents taught me how to work with others and provided a good foundation for me. CityU offered me whole-person education and inspired my professional career. Both my parents and my alma mater have enriched my life. It is very meaningful that I can link the two most important pillars in my life today,” Mr Fan said.

Mr Fan has contributed regularly to CityU’s development over the past 20 years, and he has been very supportive of the plans to establish the school of veterinary medicine, saying that now is the right time for the project to proceed. The school, if successfully set up, in collaboration with Cornell University, will be the first in Hong Kong, and probably the first internationally accredited veterinary school in the Greater China region. It will help nurture talent for, and allow CityU to make a bigger impact in, the region. “The setup of the school will benefit Hong Kong and contribute to mainland China and Asia as a whole,” he said. 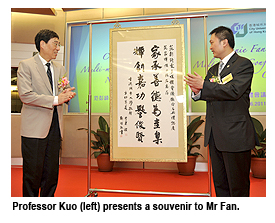 Although the Hon Leung Chun-ying, CityU Council Chairman, was unable to attend the ceremony due to prior commitments, he expressed his thanks to Mr Fan and his family via a video link.

“Mr Fan has the loving care of his family and the naming of the University’s venue is a special birthday present for his mother. It is also a special gift to CityU. Mr Fan has set a good example for our alumni and students. He has actively supported his alma mater’s development over the years since his graduation,” Mr Leung said.

Graduating from the 1st cohort of the Bachelor of Arts in Business Studies programme, Mr Fan has been conferred the title of Honorary Fellow and has received the Distinguished Alumni Award. He was an Elected Councillor in the 1st and 2nd CityU Students’ Union, and Chairman of the 2nd Students’ Union Council. He was appointed Chairman of the Convocation and Member of the Council of CityU in 2007. The founder of the Andrew Fan Top Outstanding CityU Leader Awards and the Mainland Alumni Network Scholarship, among others, Mr Fan is also CityU’s Alumni Ambassador for Greater China.

Mr Fan is a successful business leader. He joined the Nu Skin Enterprises, Inc. after graduating from CityU in 1988 and helped the company expand in Southeast Asia and the greater China region. Currently the Regional President of Greater China, he oversees business operations in Hong Kong, Macau, Taiwan and the mainland.

To his family, Mr Fan is not only a successful businessman. He is also a caring son and a loving brother. He gives as much time as possible to his family despite his busy schedule and frequent business trips.

The Connie Fan Multi-media Conference Room, located on the 4th floor of Cheng Yick-chi Building, has a capacity for more than 150 people for prestigious international academic conferences and ceremonies.