Confidence in the local job market has risen for the second year running, almost recovering to the pre-financial crisis levels of 2008, according to a survey conducted by the Department of Management at City University of Hong Kong (CityU). The survey also revealed that employees were generally not confident about the implementation of the government’s statutory minimum wage. 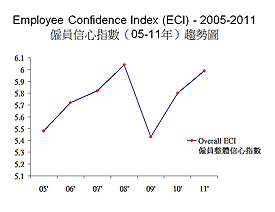 The Employee Confidence, Work Commitment and Opinion about Minimum Wage Survey 2011, conducted in March and April this year, interviewed 537 Hong Kong citizens in full-time employment (aged 18 or above). Respondents, interviewed by telephone, were asked to express their views on employment confidence, work commitment and the minimum wage.

The annual survey is one of several conducted by CityU to gauge the overall social and economic situation in Hong Kong. It offers detailed insights into how the people of Hong Kong view their jobs, and the findings are intended to help employers adjust their human resources policies in tune with employee expectations.

The Employees’ Confidence Index (ECI) is measured on a scale of 0 to 10, representing ascending levels of confidence in terms of “Well-Being”, “Job Security”, “Job Prospects” and overall perceptions of the job market. Over the past two years, the ECI findings’ mean value has risen to 5.99, suggesting a moderate level of confidence. It has almost recovered to the pre-financial crisis level of 6.04. Employees in the financial, insurance, real estate and business service industries reported the highest level of confidence (6.29), while those in the restaurants and hotel sector reported the lowest (5.55). Confidence in the overall job market rose by 0.7 points to 4.67. Though this is still moderate, the gap between confidence levels before the global financial crisis in 2008 and the current overall confidence level has narrowed significantly. 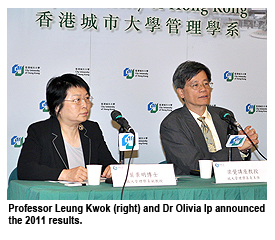 Compared with last year, no significant changes in the “well-being” component were observed. Respondents remained largely satisfied with their relations with colleagues (7.68) and felt positive about their job performance (7.27). Confidence in job security and internal career prospects rose to 7.24 (from 6.92) and 4.07 (from 4.3), respectively. People were also particularly optimistic about salaries with expectations rising by 0.51 points to 4.87. Perceptions of prospects for finding a better job went up 0.41 points to 3.99.

“Downsizing and pay cuts were observed during the financial crisis and employee confidence reached a record low. The economy in Hong Kong has been improving in the past two years, and so has the job market, with the unemployment rate falling. As a result, employees are more confident about their job prospects and more optimistic about getting a pay increase,” said Chair Professor Leung Kwok, Head of the Department of Management.

The survey was extended with a few additional questions about minimum-wage legislation, where respondents were asked to indicate their level of agreement on a scale of 1 to 5 with given statements. They generally believed that the legislation will not have much impact on their quality of life (3.95) and will not address the inequality of wealth distribution (3.66). Respondents were relatively neutral towards the statements “The benefits to society outweigh the harm” (3.09) and “It is a timely legislation” (3.05).

Dr Olivia Ip King-ming, Associate Professor of the Department of Management, said the findings were surprising. “While many political parties strongly advocated the statutory minimum wage, respondents to this survey didn’t seem to be particularly optimistic. This may be because the implementation details had not been confirmed when the survey was conducted and both employers and employees need time to adapt,” she said.