Professor Way Kuo, President of City University of Hong Kong (CityU), visited Taipei before Christmas along with colleagues in charge of student recruitment to promote CityU among elite Taiwan secondary school students by introducing the distinctive features and academic strengths of CityU’s teaching and research. 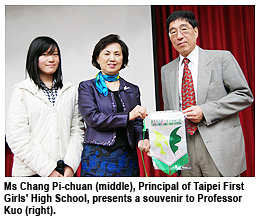 He gave a talk entitled “How should students face the trend of internationalisation of education” to graduating students at two of the most renowned secondary schools in Taiwan—Taipei First Girls’ High School and Taipei Municipal Jianguo High School.

According to data issued by the Statistics Bureau of the Ministry of Education in Taiwan, the number of Taiwan students going to traditional target countries such as the USA, Britain and Canada for further study has decreased in the past few years while that ofgoing to Australia, Japan, the mainland and other Asia-Pacific countries or regions for higher education has been growing steadily. However, three years ago rarely did any Taiwan students apply to study at any of the universities in Hong Kong.

Going to college is an important step in one’s life. Though students nowadays can obtain information through various channels, e.g. online information, magazines and education fairs, such second-hand information is no match for the sharing of personal experience. 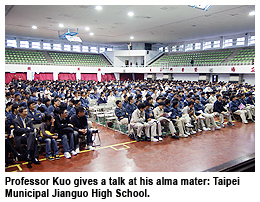 Professor Kuo was born in Taiwan and went to US to further his studies after graduating from the National Tsinghua University. He had lived and worked for as long as 30 years in the States before coming to Hong Kong in 2008. Thus, he has a lot to share with the students.

Professor Kuo noted that it has been a decades-long tradition for Taiwan students to pursue advanced study abroad. In today’s globalised environment, Taiwan students should not just confine themselves to Taiwan when they plan their future, but to look beyond it in order to keep abreast of changes.

He said, “Hong Kong is noted for its bilingual, or tri-lingual environment and known for its sound legal system. Its economic environment is similar to that of Taiwan. Its internationalised society and university atmosphere have attracted excellent scholars from all over the world. The universities in Hong Kong also offer ample opportunities for international exchanges.” 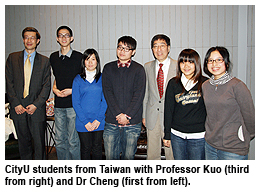 During his stay in Taiwan, Professor Kuo hosted a media lunch and conducted interviews with major local newspapers and a radio station, outlining the future developments of CityU and the importance of enhancing exchanges and interaction between the students in Taiwan, Hong Kong and the mainland.

Present at these activities were Dr David Cheng Xing, Associate Vice-President (Mainland and External Affairs) of CityU and five CityU students who returned to Taiwan for vacation. The five students were Chiang Chia-yu, Anny Lin Yu-lun, Charles Ting Chiu-chua, Sunny Wang Lin and Huang Chia-yun. They are graduates from Taipei Municipal Jianguo High School, Taichung First High School and Taipei First Girls’ High School, respectively. They are among the first and second cohorts of Taiwan students studying at CityU, who volunteered to participate in the promotion activities organised in Taipei, sharing their thoughts and experience about their study at CityU in support of their alma mater.