Senior alumni pledge to serve the University and community

A new alumni body called the CityU Eminence Society has been established with the support of City University of Hong Kong (CityU). The aim is to bring together enthusiastic and supportive alumni to proactively contribute resources, expertise and networks to help advance the University and serve the community. 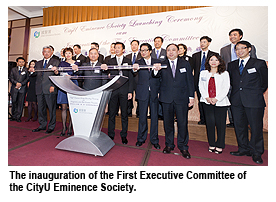 Offering his congratulations at the ceremony, Dr Leung said he was pleased to witness the creation of the CityU Eminence Society and its Executive Committee.

In his address, Mr Leung shared the achievements of CityU with alumni, saying he was proud that CityU has been doing a great job educating young people. He added that he was very pleased CityU recently won the Power Smart Contest 2010, a competition which recognised our efforts to create a low-carbon campus. 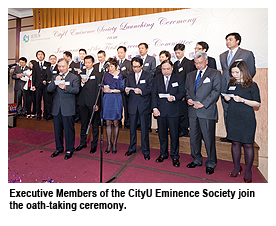 Meanwhile, on a more touching note, Professor Kuo said the CityU has set up a scholarship in memory of a CityU alumna named See Po-yan who died sadly of cancer shortly after finishing her degree at CityU.

According to the new chairman of the Society, Mr Ho, the Society has attracted over a hundred members within just a year. “I encourage you to network with other members, and actively participate in the activities that we arrange,” he said.

Mr Ho also extended his heartfelt appreciation to CityU, the Alumni Relations Office in particular, and all the members of the Steering Committee and Executive Committee for their support and contributions.

The Society will collaborate with other esteemed organisations for the benefit of its members, the University and the community, and support some meaningful community projects and services through prizes and scholarships.

It will also organise activities to expand networks and enrich experiences through exchange programmes, forums, community projects and other special events.