Environmental awareness was the theme of this year’s CityU Banquet organised by the Students’ Union of City University of Hong Kong (CityU) on 29 October. 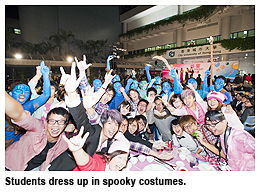 The event was titled “25th Anniversary of the Students' Union: Carnival to Support Environmental Protection”. All CityU staff and students attending were encouraged to showcase their commitment by trying to minimise food waste. 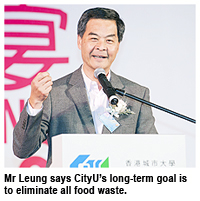 Diners were invited by the student committee organising the event to reduce the number of courses served at their table from eight to six. This voluntary initiative was taken up by 107 of the 180 tables, reducing food waste of over 400 kilogrammes .

“This is a very meaningful activity. CityU is committed to social responsibility such as minimising food waste,” Mr Leung said. “I am delighted to see that students from 107 tables are willing to reduce the number of courses. I hope it will encourage all students to consider the issue of food waste in a wider campaign,” he added. 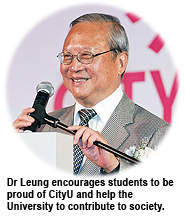 Professor Kuo said in his speech that history is a record of how people have made unremitting efforts to explore and discover in the process of solving problems.

Dr Leung said he was glad to see so many students support the campaign for a better environment.

CityU is now actively collecting information to find the best way for the University to eliminate all food waste. It will also consider encouraging members of the CityU community to buy only the quantity of food they need. 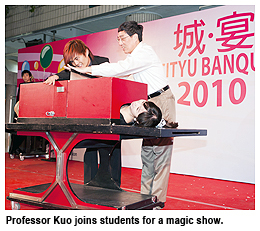 One of the highlights of the Banquet was Professor Kuo joining students in the classic illusion of sawing a body in two, a trick that had the guests gasping in amazement. Another highlight saw students parading in special costumes at the “Spooky Fashion Show,” a foretaste of approaching Halloween.

The evening ended with a lucky draw of an extra $100,000, which was donated by Mr Leung and Mr Joseph Lee Chung-tak, Council Member. Following the lucky draw, Professor Kuo and Chan Tin-yau, President of the Students' Union, officiated at the cake-cutting ceremony to bring the enjoyable evening to a close.