City University of Hong Kong (CityU) proudly announced the opening of the Applied Laboratory for Interactive Visualization and Embodiment (ALiVE) on 25 June. 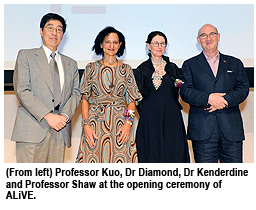 A first in Hong Kong, ALiVE is an imaginative new incubator for interdisciplinary research and a showcase for innovation in creative media. The aim is to nurture talent and vision for the development of Hong Kong’s creative industries.

ALiVE was initiated by CityU’s School of Creative Media, whose challenge-led programmes stand at the cutting-edge of digital media in society, addressing developments in museums, galleries, cultural heritage, health, the environment and many other fields.

More than 100 guests attended the opening ceremony, which was officiated by Professor Way Kuo, President of CityU; Dr Sara Diamond, President of Ontario College of Art and Design; and Chair Professor Jeffrey Shaw, Dean of the School of Creative Media and Director of ALiVE.

Speaking at the ceremony, Professor Kuo said ALiVE and CityU share similar goals and ideals. “CityU is determined to establish itself as an institution where cutting-edge technology, innovative thinking and transdisciplinary research combine to create the spectacular,” he said. ALiVE provides such an environment, allowing students to devote themselves wholly to problem-driven research and creative thinking, he added. 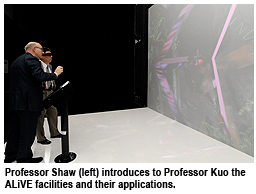 Professor Shaw said ALiVE is an exciting platform for innovations both in terms of technology and content, and for giving students, faculty and researchers the opportunity to explore new ideas.

“CityU is visionary in recognising the potential of this laboratory, and the importance of integrating research into teaching – a big challenge in education worldwide,” he said.

Situated in a 1,000m2 facility at the Hong Kong Science Park, ALiVE will leverage technological advances in cinema, games, and mobile, networked and participatory media to research new modes of immersive interactive experience that are relevant to culture, entertainment, education and industry. The emergent forms of creative media will provide new paradigms in embodied visualisation, interactive narrative, participatory media and autonomous agency.

ALiVE builds on innovations developed over the last 10 years at the UNSW iCinema Research Centre, ZKM Centre for Art and Media, and Museum 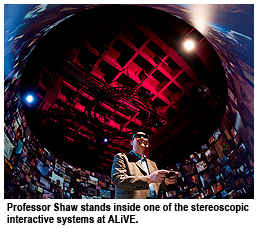 Victoria. The laboratory is led by Professor Shaw and Dr Sarah Kenderdine, Visiting Associate Professor of the School of Creative Media and the Department of Chinese, Translation and Linguistics of CityU, and Research Director of ALiVE.

Professor Shaw has been one of the leading figures in new media art since the 1960s. He pioneered and set benchmarks for the creative use of digital media technologies in the fields of virtual and augmented reality, immersive visualisation environments, navigable cinematic systems, and interactive narrative. His prize-winning works have been exhibited at major exhibitions and festivals worldwide, and are a standard reference in books on new media and interactive art. Panoramic Navigator, an innovative digital media system developed by Professor Shaw, was used by Museum Victoria to create the highly interactive and educational installation “Worldwide Animal Viewers”, which was selected recently to receive the prestigious 2010 Gold MUSE Award, Multimedia Installation, by the American Association of Museums. 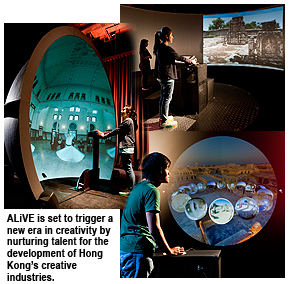 Dr Kenderdine researches at the forefront of interactive and immersive experiences for museums, galleries and across media arts and digital humanities. Her work focuses on human-centred virtual system design, visual analytics for large-scale heterogeneous cultural datasets and new narrative forms in stereoscopic and panoramic visualisation.

The inaugural exhibition at ALiVE, to be held from 26 to 29 June, will provide a unique opportunity for visitors to witness nine spectacular immersive environments that straddle the frontiers of art and science. It will feature ground-breaking innovations in panoramic 3D cinema, embodied architecture, games and animation, digital humanities, distributed media, interactive visualisation and simulation.