The award presentation ceremony of the 5th City Literary Awards organised by City University of Hong Kong (CityU) was held on 15 May. The number of entries reached a record high of 496 this year. CityU student Wei Gailan claimed the championship and 1st runner-up in categories of cultural and art criticism and short stories respectively, winning high commendations from the adjudicators. 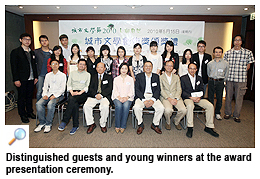 Themed “Man and Nature”, this year’s competition aimed at exploring the need for harmonious co-existence between man and nature, which broadly includes the highly concerned issue of rapid changes in the world’s climate. The overwhelming response to the competition reflected the high awareness of environment-related issues on part of the young. 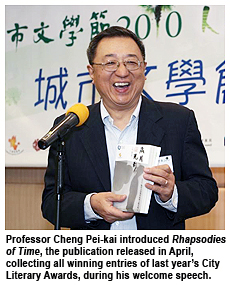 Professor Cheng Pei-kai, Chairman of CityU’s Cultural and Sports Committee and Director of the Chinese Civilisation Centre, said that literary creations ought to be stressed and encouraged, as a good foundation of language abilities is instrumental to improving the overall culture of our society. “Creativity is of utmost importance in the future development of Hong Kong, whereas literary writing can stimulate creative minds among the young people. Literary and artistic creativity helps open up the space for sustainable development of society. That is why we continue to organise the City Literary Festival and Awards every year,” he said.

Wei Gailan, PhD student at CityU’s School of Creative Media, garnered the 1st and 2nd places in categories of cultural and art criticism and short stories, respectively, for her commentary “The last piece of land and respect - On the documentary Bing Ai” and the short story Shun Sheng. Her winning commentary was unanimously selected by all adjudicators as the best writing in the category. Mr Lam, Chief Editor of Muse and columnist of Hong Kong Economic Journal and Southern Metropolis Daily, commended Wei for the subtle observations, persuasiveness and confidence presented in her writing, which showcased the manner and quality of a critic. Mr Chang, a prominent Taiwanese writer regarded as one of the best Chinese novelists, said Shun Sheng was one of the most outstanding works in recent years’ writing competitions as it showed sophisticated and affectionate writing skills. 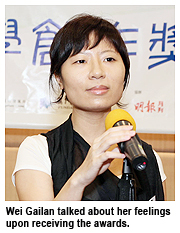 A Tsinghua University postgraduate, Wei pointed out that the genres of criticism and short stories are very different but both require good writing techniques and styles, especially for critiques. Only those who have received rigorous writing training are able to produce a good work. She said, “Let’s take film criticism as an example. A competent film critic must have a deep understanding of the film language before he or she is able to perform critical and logical analysis through rigorous training.”

“As the theme of this year’s competition is ‘Man and Nature’, I think my writing in some way should partly be credited to Tao Yuanming, the famous writer of the Jin Dynasty. I have subconsciously referred to him in both of my works,” she said humbly. At the same time, she was working hard to make her dreams come true.

The City Literary Awards aim to promote local literary writing by encouraging students in tertiary institutions and youngsters aged 15-24 in Hong Kong and Macau to communicate their ideas through writing. The Awards are a major event of the City Literary Festival, organised by CityU’s Cultural and Sports Committee, Chinese Civilisation Centre and Department of Chinese, Translation and Linguistics. The Hong Kong Arts Development Council and Macao Foundation are co-organisers and Hang Seng Bank is the sponsor. During the Festival, prominent local and overseas writers were invited as speakers for seminars, exchange sessions and workshops to share their insights and experience on literary writing.