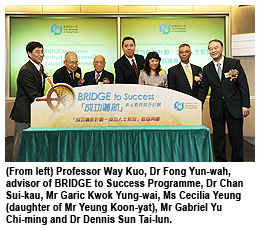 City University of Hong Kong (CityU) has launched its video series, “A Portrait of Success” on 5 March. The video is part of the BRIDGE to Success Programme, a fundraising campaign initiated by CityU that invites prominent individuals to take part in the University’s education process by sharing their successful experience with students and supporting diverse learning projects through donations.

A major component of the BRIDGE to Success Programme, the video series of “A Portrait of Success” comprises interviews with nine distinguished leaders from a range of backgrounds as they share their paths to success. The videos were produced in their entirety by students from CityU’s School of Creative Media and the Department of Media and Communication. They have applied their newly acquired knowledge and skills to all facets of production, including interviewing, shooting, editing, dubbing and adding background music. In addition, during their interviews, the distinguished guests’ enthusiasm and perseverance had impressed and inspired them to work hard on their studies.

CityU’s President Professor Way Kuo thanked all the members of the advisory committee, sponsors of the BRIDGE to Success Programme and the distinguished guests who took time from their busy schedule to be interviewed for their support of CityU. 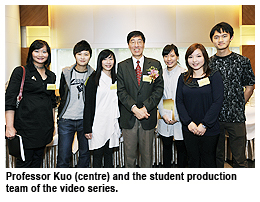 Professor Kuo said the first of the five guidelines in CityU’s Strategic Plan 2010-2015 focuses on student success in academic achievement and career development. “Through the BRIDGE to Success Programme, we wish to encourage social leaders who are keen to support education not only to contribute to student development projects, but also be involved in the University’s education by sharing their success stories and experience and serving as role models for students.”

Dr Dennis Sun Tai-lun, the Convenor of the board of advisors of the BRIDGE to Success Programme, said, “Since its launch, the programme has raised a total of HK$45 million inclusive of the government’s matching grant and donations made by many social leaders and alumni who are enthusiastic supporters of education.”

Dr Sun stated that all the funds have been used for student development projects, including industrial internships, student exchange, enhancement of study environment and establishment of scholarships and bursaries such as the Chan Tai Ho Education Fund, Chan Wing Fui Scholarships, Fong Yun Wah Minority Ethnics Scholarships and Mr Wong Yip Wing Bursaries. The BRIDGE to Success Programme will continue to hold activities such as seminars involving social leaders. 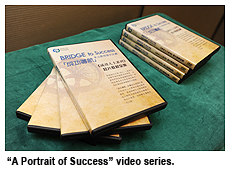