CityU jointly announced the 2009 fourth quarter results of the Chinese Consumer Confidence Index on 18 January in Beijing with Capital University of Economics and Business, Central University of Finance and Economics, Renmin University of China, Fu Jen Catholic University, in Taiwan, and Macau University of Science and Technology. The consumer confidence scores for economic development in mainland China, Macau, Hong Kong and Taiwan were 125.5, 116.6, 102.3 and 57.1 respectively, the highest since the survey was first conducted in the first quarter of 2009.

The overall Hong Kong Consumer Confidence Index has been below 100 for the past four quarters, reflecting Hong Kong consumers’ general lack of confidence. Hong Kong consumers were still most confident about living standards (107.9) and were the least confident about housing purchases (66.3). Confidence in the employment market again showed an upward trend and has improved for three consecutive quarters to 97.7, reaching a record high in 2009. Confidence in consumer prices and housing purchases, however, dropped to record low to 67.3 and 66.3 respectively. 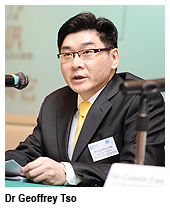 Though people in mainland China, Macau, Hong Kong and Taiwan are optimistic about economic development, they were less satisfied with consumer prices. The decrease of confidence in consumer prices was most obvious in mainland China. The score was 14.4% lower than last quarter and nearly 30% lower than the first quarter. Confidence in housing purchases was at a record low on the mainland (68.2), in Hong Kong (66.3) and Macau (44.4).

The overall consumer confidence index in mainland China (95.0) and Hong Kong (88.4) dropped in comparison to the previous quarter and was rather stable in Macau (86.9). Though Taiwan (66.6) recorded an obvious improvement, it was still the lowest among the four locations.

The Chinese Consumer Confidence Index has measured quarterly consumer sentiment in mainland China, Macau, Hong Kong and Taiwan since the first quarter of 2009. The survey is a collaboration between six universities in the four locations, with CityU responsible for research in Hong Kong. It collects views quarterly from more than 1,000 Hong Kong residents aged 18 or above.