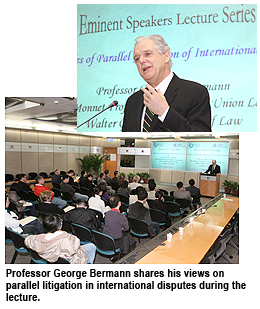 The School of Law of City University of Hong Kong hosted an eminent speaker lecture entitled “The Puzzles of Parallel Litigation of International Disputes” on 7 January. The speaker was Professor George A Bermann, Jean Monnet Professor of European Union Law and Walter Gellhorn Professor of Law at Columbia Law School.

International parallel litigations (different courts in different countries) impose a heavy burden on the parties involved and judicial resources. Mechanisms such as Forum non Conveniens, Lis Pendens, Anti-suit Injunctions and Clawback are applied to control repetitive, related or derivative proceedings. Professor Bermann presented a detailed and critical evaluation of these doctrines and examined their respective risks.

Inconsistent adjudications may impair court authority and generate inter-governmental discord. Harmonisation in procedures and remedies, interaction between courts and the application of treaties are called upon to settle the divergence in parallel litigation. In the lecture, Professor Bermann assessed solutions and common approaches adopted by different courts and international treaties. Finally, he concluded by exploring future attempts to remedy parallel litigation.

Professor George Bermann is the Jean Monnet Professor of European Union Law (a chair conferred by the Commission of the European Communities), as well as the Walter Gellhorn Professor of Law at Columbia Law School. He is incumbent President of the International Academy of Comparative Law. He has been a member of the Columbia Law School faculty since 1975, teaching a range of subjects in European Union Law, Comparative Law, Transnational Litigation and Arbitration, WTO Dispute Resolution and others.