Two final year students from the Department of Electronic Engineering of City University of Hong Kong (CityU) have won international kudos by winning an international scholarship and clutching the bronze prize in a keenly fought regional IT competition. 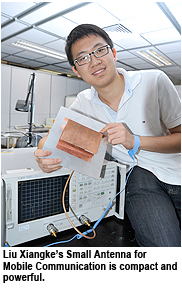 Liu Xiangke was awarded the IEEE MTT-S Undergraduate/Pre-graduate Scholarship for Fall 2009 by the IEEE Microwave Theory and Techniques Society, US, for his “Design of Small Antenna for Mobile Communication” in support of his M.S./Ph.D programme in Electrical Engineering at Stanford University. He is among six students worldwide to receive this scholarship. This is the fourth consecutive year CityU students have received this award.

The antenna developed by Xiangke is more powerful than most base station antennas in use nowadays. The small antenna integrates such features as a compact body, high receptivity and transmission power and wide-band properties that existing base station antennas do not simultaneously accommodate. It is suitable for most frequency bands that are widely used in wireless communications systems. These include TV signal transmission and wireless mobile communications such as CDMA, GSM, PCS, UMTS, BLUETOOTH and wireless LAN. Xiangke’s product provides users with a more economical choice as it averts the need to instal various base station antennas for different purposes. 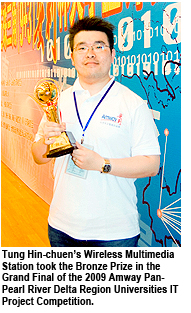 Tung Hin-chuen was winner of the Bronze Prize in the Grand Final and also Runner-Up for the Hong Kong Region in the 2009 Amway Pan-Pearl River Delta Region Universities IT Project Competition, for his project “Wireless Multimedia Station (WMS)”. More than 500 teams from universities in 12 locations in the Pan-PRD region competed in the event co-organised by the Internet Professional Association and Yunnan Federation of Computers.

The WMS combines the functions of a portable media player and digital photo frame into one handheld device integrated with Zigbee wireless technology, so media files can be transferred to other systems over a longer distance without a cable connection. Zigbee also enables data transfer simultaneously from the source device to multiple target devices, thus saving time and cost.

Professor Luk Kwai-man, Head of the Department of Electronic Engineering, said the students' achievements once again exemplified CityU’s teaching and research excellence. “The students’ talents and innovation potential have been developed to a very great extent,” he said.

Professor Luk and Dr Ricky Lau Wing-hong, Associate Professor of CityU, are Xiangke and Hin-chuen’s supervisors on their winning projects. “I have taught Hin-chuen for three years since he joined the department. His profound interest in embedded systems has impressed me greatly and laid a solid foundation for his research capabilities. His success is due to his effort and enthusiasm,” said Dr Lau.

Dr Alan Lam Hiu-fung, Chief Technical Officer of Sengital Ltd, where Hin-chuen developed his project in a real industry setting while working for a placement, praised him for his technical knowledge and industrious attitude.

Both students were grateful for their supervisors’ invaluable support. Xiangke commended CityU for the uniqueness of its electronic engineering programme, while Hin-chuen attributed his success to the University’s state-of-the-art facilities.