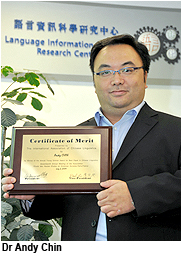 The award recognised Dr Chin's research on the development of Cantonese grammar involving the verb “畀”（pei, meaning to give or to allow, as well as an indirect object marker similar to the word ‘to’）. Among this year’s finalists were entrants from the University of Cambridge, Tsinghua University, Chinese Academy of Social Sciences, Cornell University, Tokyo University of Foreign Studies and Mainz University in Germany.

IACL is a professional organisation devoted to the promotion of scientific research into Chinese languages and their dialects and is well respected in the field of Chinese linguistics. Each year, the IACL’s Review Committee selects the best young scholar, aged 35 or below and whose current rank is below associate professor.

Dr Chin said he felt honoured to receive the award and he hoped that more young scholars would join the Chinese linguistics research team in the future. He thanked Chair Professor Benjamin T’sou Ka-yin, Director of LISRC, for his support and encouragement.

This research made use of a wide range of linguistic data: the oracle-bone inscriptions, the dialects of Wu, Min and Hakka, as well as more than 40 pre-modern Cantonese dialect materials published from 1828 to the 1970s. Dr. Chin also conducted field work in Conghua of Guangdong Province in order to work out the possible factors triggering the syntactic change.

The research showed that there are many factors contributing to linguistic change. “Language contact is one of these factors.” said Dr Chin. “This can be well exemplified by Hong Kong Cantonese, which has been receiving influence from English and Putonghua”.

Dr Chin received his Bachelor’s degree and Master of Philosophy from the Department of Chinese, Translation and Linguistics of CityU. He was then awarded a Sir Edward Youde Memorial Fellowship for Overseas Studies to pursue his Doctor of Philosophy at the University of Washington. Lastly, Dr Chin expressed thanks to Professor Anne Yue, his dissertation advisor, for her inspiration and advice.