Initiated by the Run Run Shaw Library of City University of Hong Kong (CityU), the Fifth Outstanding Academic Papers by Students (OAPS) Task Force Meeting was held on 15 May 2008, at Tsinghua University in Beijing. CityU, alongside the other seven partner institutions, reviewed the past year’s progress of OAPS and formulated strategies for its future development. 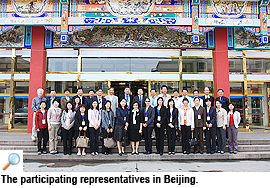 OAPS is one of CityU’s Digital Library Initiatives and Institutional Repository Projects, preserving students’ outstanding works in digital format to make them readily accessible to the CityU community and general public. 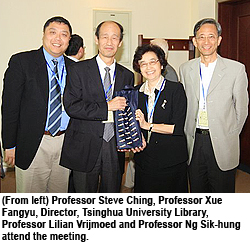 During his presentation entitled “Research Publications by Psychology and Sociology Students”, Professor Ng stressed that research and the publication of findings was crucial for the advancement of knowledge and student learning. He believed that storing students’ works on bookshelves was ineffective and outdated and that the way forward was to make the works accessible online. He said this could also bestow recognition upon students’ outstanding research achievements. An independent evaluation of the project conducted between May and July 2007 found that students frequently used the online facility. Most of those surveyed were satisfied with the system.

During the discussion session, Professor Vrijmoed suggested that apart from granting awards to students, training workshops would be organised to enhance students’ writing skills within their specific discipline. She would work with the Library to coordinate and organise the workshops to cater for students from OAPS participating universities.

It was decided at the meeting that an OAPS cross-institutional website would be established by Tsinghua University Library so that all partner institutions could preserve and share their students’ high quality papers in a more effective, efficient and easily accessible way. It was also agreed that CityU Library would serve as the coordinating unit for the OAPS Working Paper Series, which comprises papers accepted by the project.