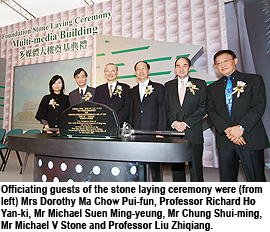 City University of Hong Kong (CityU) held the foundation stone laying ceremony on 26 March for its state-of-the-art Multi-media Building (MMB). The building, designed by renowned architect Mr Daniel Libeskind, is applauded for balancing function and inspiration while creating a striking landmark that will be a focal point for the development of creative media in Asia.

In his welcoming address, Mr Chung expressed his gratitude to the Government for funding the construction of the building, and members of the Legislative Council's Public Works Committee for giving the green light to the project. 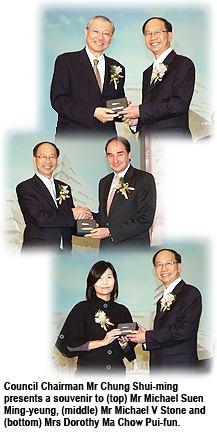 "The stone-laying ceremony today marks a milestone not just for the School of Creative Media, or CityU, but also for Hong Kong, which will gain a landmark building," Mr Chung said. "Hong Kong has a proud tradition in the field of creative media. CityU, through the School of Creative Media, is dedicated to training a new generation of trans-media professionals and researchers who can integrate various media forms to produce world class creative products with content that draws upon our cultural roots and rich local heritage."

Mr Suen addressed the ceremony and congratulated CityU and all those who have contributed to bringing this project to fruition on their vision and commitment to promoting creative media education and research in Hong Kong.

"I am sure the Multi-media Building will further strengthen CityU's role in the creative media field, thereby enhancing Hong Kong's regional competitiveness in this respect," said Mr Suen.

Professor Ho thanked the government and community for their continuous support of the MMB project. He confidently asserted that the creative talents of SCM students inside the building would be a worthy match for the outstanding aesthetic qualities of the exterior of the building.

"By attending this foundation stone-laying ceremony, you are not just watching the start of a new building, you are witnessing the materialisation of a dream for a whole generation of creative Hong Kong students," said Professor Ho. 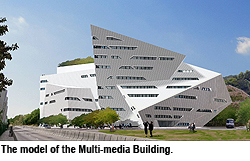 Situated on the northern boundary of the CityU campus on Cornwall Street, the MMB is a nine-storey complex with 13,400 square metres in net operational floor area. In addition to study space, staff offices, student/staff amenities and supporting facilities, there will be purpose-built laboratories and theatres, and advanced audio-visual equipment and facilities to support teaching and research. It is scheduled for completion in 2010. The building will be the permanent home of the School of Creative Media and will also house the Department of Computer Science, the Department of English and Communication and the Centre for Applied Computing and Interactive Media.