Ryan Chan Hon-yan, a graduate of the School of Creative Media (SCM) at City University of Hong Kong (CityU), claimed an outstanding award honour at “The 4th FUTURE VISION-Asian International Youth Film Festival”. His film The Backpacker stood out from more than 600 entries from South Korea, Japan, mainland China and Hong Kong. He was one of only 12 Outstanding Award recipients and the only winner from Hong Kong.

Graduating from the SCM in 2007, Ryan majored in “Moving Image: Live Action”. He said the award and his 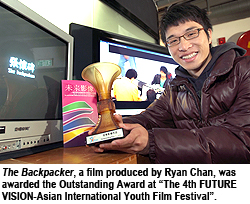 studies at SCM further boosted his determination to pursue a career in film production. Currently doing continuity work for a film production company, he is responsible for recording the myriad details of each scene so colleagues from the editing and prop teams can prepare for the shooting of the next scene.

“It is meticulous work, as I need to mark down all sorts of information, right down to the quantity of film used,” he said. “It’s hard work but it’s the starting point for all film workers and will be an important training ground for my career.”

“I am very interested in film production and I want to try various types of film roles, including scriptwriting, directing and production,” he said. “I am very grateful to the professors and instructors of SCM, particularly Mr Patrick Tam Ka-ming, Associate Professor of SCM. He taught me that apart from skill, attitude is the most important element in becoming an outstanding filmmaker. Also, we should be persistent in striving for perfection.”

Mr Tam was one of the advisors of Ryan’s graduation project. “Ryan created his work from the perspective of a young man,” said Mr Tam. “Shot in a realistic style, it’s a concrete work that attempts to depict the genuine feelings of a visitor in the enigmatic city of Hong Kong. I am very pleased at his winning this award,” he added.

Inspired by his daily life and events that happened to his friends, Ryan created his work entitled The Backpacker. The film portrays a young man who has just graduated from school. In his quest to find the meaning of life, the young man plans to embark on a solo journey, leaving everything and everyone behind. He puts on his backpack and sets about leaving Hong Kong, the city in which he has lived for many years. 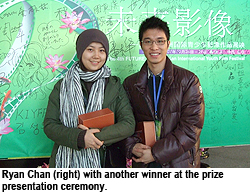 But after losing his identity card and passport, he chooses to remain on the streets of Hong Kong.

“As young and fresh graduates, we really feel lost in this fascinating city,” said Ryan. “I want to use the film to deliver the message that we should pay attention to the details in our life and treasure the people moving around us.”

Dr Louisa Wei Shiyu, Assistant Professor of SCM, was the other advisor of Ryan’s graduation project. “The theme of Ryan’s film is young people’s uncertainty about the future. In terms of film language, his work blends elements of both drama and documentary, precisely projecting a realistic image of Hong Kong. It also successfully captures the mindset of today’s local young people. It is a huge honour to Hong Kong that Ryan should win such an accolade from the many hundreds of entries from around Asia.”

“The 4th FUTURE VISION-Asian International Youth Film Festival” was formerly known as the “Korean International Youth Film Festival” and has been an annual event since 2004. To promote exchanges between young film lovers in different countries and to nurture young talent, the festival was renamed in 2006. It is now held as a film show and a film festival, rotating between China, South Korea and Japan. The theme of the festival this year was “People and Nature”. It was held in Beijing in October 2007.