Basketball players from twelve secondary schools took part in an Inter-School Basketball Invitation Tournament, 24 July, organized by CityU's Student Development Services (SDS) as one of the sports events held in celebration of the University’s 20th anniversary.

The tournament was divided into boys' and girls' groups, each competing in six teams -- most of them came

from the top division schools of the Hong Kong Schools Sports Federation (HKSSF) Inter-School Basketball League. After 17 exciting games that ran for about eight hours, the in – also this year's champion in the Hong Kong Secondary Schools Basketball Marathon – clinched the boys’ group championship. The Newman College, CNEC Christian College, and the Jockey Club Ti-I College came in first, second and third

runner-up, respectively. In the girls’ group, won the top prize, while the (Tai Hang Tung), the Jockey Club Ti-I College and ranked second, third and fourth place, respectively. Over 500 secondary school and CityU students shared the joy by cheering teams on.

and the CityU Old Boys. Both teams comprised first-rate professional players, including Choi Foon Yu from the South China Basketball Team, and Eric Cheung from the Fujian Basketball Tam. Well-known reporters, such as Chui Ka Lok and  Choi Kam Fung from ATV, and Lui Hoi Bin from Apple Daily, took part in the match. The two teams enjoyed a riveting bout that ended in a tie of 50 points each. 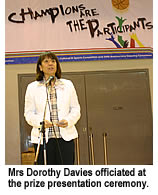 "We were very pleased to have gathered outstanding players to participate in today's thrilling Inter-School Basketball Tournament. We hope the games cultivated friendship among all of us," said Mrs Dorothy Davies, Acting Director of SDS, officiating at the prize presentation ceremony. "I am particularly pleased to learn that some secondary students have been very impressed by CityU's sports facilities. Maybe in the near future, they can join a CityU sports team and become some of our own team members!"