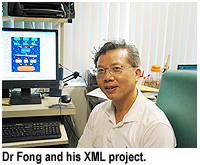 Dr Joseph Fong, Associate Professor of the Department of Computer Science,  obtained a nearly HK$1 million sponsorship in mid-May from the Government's Innovation and Technology Fund (ITF) and the industrial sector, in support of his  project to develop a software tool that advances database processing onto the Internet superhighway. His research outcome will have significant application value to e-Government and e-Commerce.

The gist of Dr Fong’s project is about integrating XML, Extensible Markup Language,  with the mainstream relational database, thus enabling massive information transmission through the Internet. Currently, the relational database is popularly used in everyday applications such as payroll system, but has not yet made it onto the Internet.  “XML is likely to become the data standard on the Internet,” Dr Fong said. “My research on a replicate XML database can help the transmission from traditional data processing into universal Internet computing—allowing them to become interchangeable.”

That would speed up Electronic Data Interchange (EDI) exponentially, propelling both e-Government and e-Commerce in a big leap forward. Alongside being Internet transmissible, the XML database also eliminates the cost of programming, which is one of the most undesirable factors hampering the development of relational database on the Web. “The XML database is convenient and low-cost,” Dr Fong said, “but whether it will become popular depends on whether the average user will find it comfortable reading XML markup language.”

Much work has been done on translating relational data into XML documents, and vice versa, in the world of computer academic research. The uniqueness of Dr Fong’s project, now in its fifth year of investigation and experimentation, is its much anticipated outcome—a combined technology in the form of a software tool ready for meeting latent needs in both the business and government sectors. "The success of this integrated technology would pave way for the establishment of an XML Research Centre at CityU," Dr Fong stated.