In his first public speech since retirement less than three months ago, Mr Tsang Yam Pui, former Commissioner of Hong Kong Police, told an audience of some 300 business executives on 26 February that a leader requires "wisdom, courage and heart." 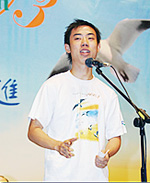 Drawing from his 38-year experience in the police force, Mr Tsang doused his lecture at CityU, called "Maintaining stability through times of change," with morsels of wisdom from a range of sages, including the Chinese military strategist Sun Tsz and American management guru Mr Jack Welch, former Chairman of GE Corporation. Mr Tsang advised the audience, mainly students and alumni of CityU's Executive Master of Business Administration (EMBA) programme, that a leader thrives on seven qualities: being positive, being strategic, knowing the stakeholders, going for win-win outcomes, striving for value for money, not relying on luck, and not biting off more than one can chew.

In May 1996, when he was promoted to the duty of Deputy Commissioner of Police (Management), the police force, the largest Hong Kong Government department with more than 33,000 constabulary and non-constabulary staff and an annual operating budget of HK$ 12 billion, faced a number of unprecedented challenges. These were: political uncertainty over the 1997 handover leading to a drift between local and non-local staff over differences in benefits; general concern over unattainable service pledges required under the Public Sector Reform; an outdated financial and resource management system that hampered efficiency; and a rigid, regimented organizational culture, as well a public image problem.

Backed by a strong "buy-in" process among his senior colleagues and internal communications with the rank-and-file officers until his last days as the Commissioner, Mr Tsang tackled the challenges head on—"Doing nothing, or muddling through are not options," he admonished—and he succeeded in bringing about a cultural shift in the largest of the four disciplinary forces in Hong Kong. Through his leadership, the police force was able to achieve efficiency and value for money, while providing better service to the community. Policemen have now acquired a sophisticated, smarter image and command greater respect from the public.

He attributed facilitating internal communication and team-building among his staff to the advent of information technology, such as force-wide email messages. "But it is more than a one-way, top-down approach," he said in the question-and-answer session. Leaders have to listen to the rank and file staff, understand their sentiments and provide informal occasions for such exchange of opinions to happen.

"I don't know what an adjunct professor is," the former police chief began his lecture, "but I like being called a professor." He accepted the invitation of the Faculty of Business (FB) to become an adjunct staff member, suggesting that he would have more management insights and experiences to share in future lectures. After the lecture, he was presented with a certificate of appointment and a souvenir by Professor L K Chan, FB Dean.

The FB organized the lecture as part of a series in the EMBA's course on Leadership and Organizational Change. Professor Richard Ho, Chair Professor of Finance, introduced the speaker and served as the moderator in the hour-long Q & A session after the talk.

Mr Tsang retired from the police force in late December 2003, after an illustrious 38-year career, rising from an Inspector in January 1966 to the apex of the police hierarchy in January 2003. Between May 1996 and his appointment as the Chief, he served as the Deputy Commissioner (Management) and introduced modern management concepts and practices to help reform the force. He was awarded the Gold Bauhinia Star, for his contributions to and leading the police force into the 21st century.