A collection of 200 ceramic relics, now on display at the CityU Gallery until 8 January, retraces the historical importance of porcelain as 's maritime export to and cultural exchange with the West.

The is known the world over. Lesser known, but arguably of equal historical significance, is the route of porcelain export, known to many maritime trade scholars as the "ceramic route" or "the maritime silk road". Now, "China Westward — Exhibition of Chinese Export Ceramics from 12th to 15th century", offers viewers a rare glimpse into that part of Chinese history: the story of porcelain as a maritime export and cultural conduit between and the West. 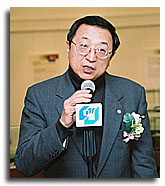 Organized by The Chinese Civilization Centre (CCIV), the display presents a collection of some 200 ceramic relics gathered from a diversity of archaeological sites and institutes scattered throughout , mainland , and . "We hope this collection helps piece together the historical picture of Chinese porcelain going westward," said CCIV Director Professor Cheng Pei-kai at the opening ceremony, December 13. The exhibition is on until 8th January at CityU Gallery. 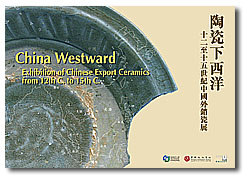 Chinese porcelain rivals silk for its cultural contribution to world civilization. From the dynasties of Tang and Song onwards, porcelain accounted for the bulk of commodities among exports and became an important agent of Chinese civilization to Southeast Asia, India, Persian Gulf and as far away as the East Coast of Africa. Quanzhou and in were the major entrepots. 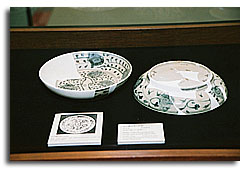 The exhibition stems from three main sources: the CCIV "China Westwards" project research team's collection from ruins of Angkor, ; samples provided by archaeological institutes in and mainland ; and a collection from the HKSAR's Antiquities and Monuments Office. CCIV conducted the "China Westwards" project with CityU's Department of Physics and Materials Science, using the scientific methods of X-ray fluorescence and thermoluminescence on porcelain dating and testing. "Using an interdisciplinary approach, the project blends science with humanities," Professor Cheng said. Also on display are some of the initial findings and analysis of the project team on the role of porcelain exports in 's maritime trade with , 12th to 15 century. 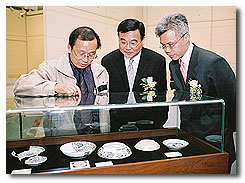 Officiating the exhibition ceremony, both Dr Louis Ng, Executive Secretary of the Antiquities and Monument Office, and Professor Y S Wong, CityU's Vice President (Administration) reminded the audience not to overlook the importance of Hong Kong as a place of rich archeological resources. A significant proportion, about one fourth, of the ceramic relics showcased at the exhibition has been excavated in , mainly from and Diamond Hill.