Shaping the future of global telecommunications 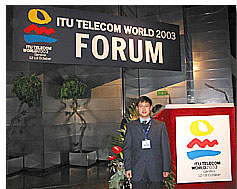 A joint declaration on how to overcome the issue of the "digital divide", drafted by more than 300 university students from 189 nations/regions around the world, will be presented to about 50 heads of state in an upcoming world summit on global telecommunications, to be held in mid December. A CityU research student, Mr Steven Yang, was one of the young drafters.

Mr Yang, from the Department of Electronic Engineering, was one of two university students selected by the HKSAR government to represent Hong Kong at the ITU (International Telecommunication Union) World Telecom 2003 Youth Forum, held in Geneva from 8 to 18 October. The selection was based on papers submitted by candidates outlining their ideas for developing information and communications technologies (ICT) in their home countries. The forum, held for the first time by the ITU, which is part of the United Nations, provided a common platform for young people all over to world to express their views on issues related to global telecommunications. One of the most significant outcomes was the joint Declaration, drafted by the young participants, on how the development of ICT could bridge the divide between the digitally advanced and the digitally disadvantaged sectors, especially in developing countries. The Declaration will be presented to more than 50 heads of state in a upcoming world summit, also organised by the ITU, on 10 to 12 December, to address a broad range of issues, such as cyberspace policy and boosting Internet security.

Mr Yang said the youth forum had provided him with a new slant on telecommunications. "My perspective was very much confined to the technical and engineering aspect of telecommunications before the trip to Geneva," he said. "Now I also look at the social and economic implications." Establishing cyber-learning centres in rural areas, developing e-portals adapted to local culture, and setting up enterprise funds to allow people with innovative ideas to start their own ICT companies were among the various ideas he raised in his paper on bridging the digital divide. 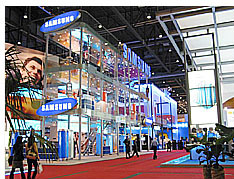 It was a truly global experience, too, taking part in a joint declaration with young people from all over the world. "I feel I've contributed to shaping the future of global telecommunications," Mr Yang said.