Mr Kenji Yum in the Department of Electronic Engineering (EE) at CityU became the first student researcher from Hong Kong to win an award in the Student Paper Competition at the International Microwave Symposium (IMS) held mid-June in Philadelphia, US. 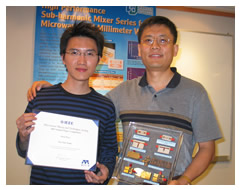 Mr Yum's research focuses on developing low-cost solutions for millimetre wave communication, which is important in improving broadband interconnection infrastructures all over the world. Based on CMRC technology developed by Dr Xue Quan, Senior Scientific Officer of EE's Wireless Communications Research Centre, Mr Yum invented a new generation of harmonic mixer, which can achieve super low-conversion loss at one-tenth of the prevailing cost, but with a performance 100 times better than similar products on the market. His invention is applicable to multi-media communication services, collision avoidance systems and indoor wireless LANs. CityU is applying for patents on the new technology in China and the US. 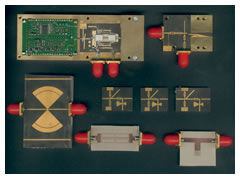 The IMS is a prestigious global conference in the wireless communication industry, where all major corporations in the field, such as NEC, Motorola and Fujitsu display their latest breakthroughs. The annual Student Paper Competition is one the highlights. This year, a total of 276 papers were received, and the authors of 24 papers were invited as finalists to present their research before a panel of judges. Among the finalists were Mr Yum and students from top-notch research universities such as Georgia Institute of Technology, Saga University of Japan, Stanford University, the University of California at Los Angeles, and the University of Michigan. Mr Yum described his impressions after the 2003 IMS: "The trip has broadened my horizons. I realize that CityU, though a young institution, is as good as other world-class universities in terms of teaching quality and research facilities. I also found out that what we have at CityU--close teacher-student relationships is not so common in other universities. That is something I will always cherish."