Abstract concepts of physics and mathematics are hardly the kind of topics that fill a room and thrill an audience. Professor Sir Michael Berry's lecture on the "seven wonders of physics" at on 18 February was, however, nothing short of a small wonder itself. Not only was the Multi-Media Conference Room packed to the brim with an audience of 500, many of whom had travelled from other universities across the city, but every pair of eyes stayed glued to the charismatic speaker. Introducing Sir Michael to the audience, Professor Roderick Wong, Dean of Faculty of Science and Engineering, said his eminent stature as a physicist and mathematician was responsible for the huge turnout. 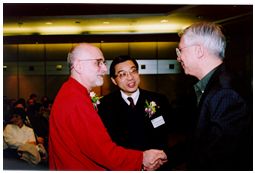 Delivering another in the series of CityU's Distinguished Lectures, Sir Michael said his "non-technical" talk was premised on the notion that the "simple, beautiful ways of nature can well illustrate the abstract, theoretical ideas of physics and mathematics." Speaking with verve and zest, punctuating his talk with animated gestures and humorous anecdotes, Sir Michael tackled his seven wonders one by one: moon-driven tidal waves, light interference in rainbows, the one-way spinner, the green flash in sunsets, quantum mechanics in prime numbers, water swirling down the plughole, and the twists and turns of a belt to show quantum indistinguishability. 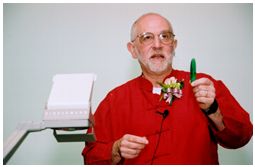 Citing the example of a tidal wave near his hometown of , he explained how river water flowing downhill to the sea could be pushed by incoming tidal waves from the sea because of moon-driven forces. "Gravity holds us down while the earth holds the moon in its orbit," said he, "that's why you can see the splendid view of the , near in , when the tide rises."

In explaining about light difference magnified in rainbows, he illustrated how one physical theory, ray optics, is superseded by another, wave optics. He then went on to demystify the optical principle behind the 10-second "green flash" moments before the sun sets in a clear sky. "Familiar physics in the refraction of light can operate on an unfamiliar scale," he said. In another example, he demonstrated how prime numbers are distributed exactly like energy levels in quantum chaos, illustrating "an unexpected connection" between arithmetic and physics. Drawing on simple, easy-to-find natural phenomena, Sir Michael took the audience on a journey that traversed the vast expanse of classical and quantum physics, covering topics ranging from gravity, optics, symmetry breaking, quantum mechanics and the enigmatic Riemann's hypothesis. 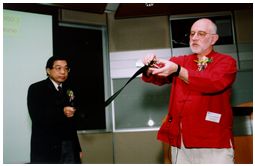 Sir Michael joined Bristol University in 1965, was appointed Royal Society Research Professor in 1988 and was knighted in 1996. A world-renowned physicist for his studies in the topological aspects of wave motion in classical and quantum scenarios, he is the author of over 300 journal articles and a highly-regarded speaker in the world-wide academic and research communities. He is a fellow/member of several academies: the European Academy, the Royal Society of London and the National Academy of Sciences (US), to name a few. Over his long illustrious career, Sir Michael has received many honours and prestigious awards, including the Royal Medal of the Royal Society, the Paul Dirac Medal of the Institute of Physics (UK) and the Wolf Prize in Physics.