CityU's Professor Yeshayahu Lifshitz and a group of scientists from the University's Center of Super-Diamond and Advanced Films have removed a difficult hurdle that has long plagued the progress of diamond science and technology.

The breakthrough will enable the fabrication of much smaller, denser and more powerful electronic devices capable of operating at high temperatures and very harsh radiation environments-perhaps in space or on distant planets. Other applications include protective coatings for optics, hard coatings for cutting tools, drills, sliding parts, and bio-implants, as well as sensors and electrodes for electrochemical applications.

This new discovery represents yet another significant accomplishment by Professor Lifshitz, and Professor Lee, both of whom hold the title of Chair Professor of Materials Science in the Department of Physics and Materials Science. These accomplishments have been documented in Science and Nature, both world-renowned scientific magazines. Their recent breakthrough was highlighted in the Diamond Film 2002 conference in Granada, this past September. 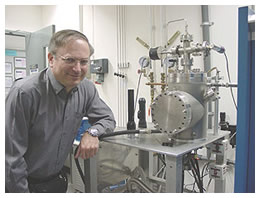 Professor Lifshitz and his collaborators develop a complete and detailed model for diamond nucleation, which is of general interest and applicability to many thin films. Professor Lifshitz suggests that the nucleation process of diamonds through the use of energetic species bombardment is very different from what was previously believed.

"The best analogy to describe it in layman's words would be the conception of a child during pregnancy," he explained. "The entire nucleation process occurs inside the material, not on its surface, contrary to what was previously believed. Energetic carbon and hydrogen atoms bombard the substrate and penetrate to positions several atomic layers below the surface.

"They form a dense carbonaceous material in which tiny diamond embryo crystals, containing 30 atoms each, are created and protected. The chance of formation of an embryo diamond crystal is very small, similar to the very small chance of a sperm cell to fertilize the female's egg. Later, the diamond embryo is nurtured by its surrounding material and grows due to the impact of the energetic atoms bombarding it. It forms a 'baby' crystal big and mature enough to be 'born', or be strong enough to survive the outside environment for further growth."

This nucleation and growth model is not unique to diamonds, but can be applied to form a host of exotic crystalline forms of different materials. This is an important contribution to the understanding of nanostructure novel materials, one of the hottest topics of current science and technology. Practical processes for better quality diamond production can be tailored, based on the proposed mechanism. Subject to more testing, further advanced understanding and control of diamond growth is now feasible.