CityU researchers have unveiled the results of a series of projects that will dramatically improve the biomedical properties of blood contacting materials used in artificial implants for people with cardiovascular conditions. 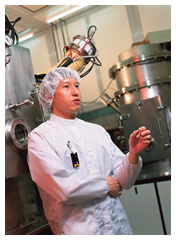 Led by Professor Paul Chu, Chair Professor of Materials Engineering in the Department of Physics and Materials Science and Director of CityU's Plasma Laboratory, the team believes their work offers the medical world a cost-effective method of enhancing the biocompatibility of materials used in implants and a number of other orthopaedic and orthodontic procedures that depend on bio-integration.

"The problem facing medical practitioners," explained Professor Chu, "is ensuring the interface between biomaterials and the human body's bio-environment does not result in a negative reaction such as chronic inflammation, thrombosis, malfunction or, ultimately, rejection."

The human body, though, is designed to obstruct intrusive devices such as artificial prostheses and will defend itself against what it considers unwarranted invasion. While a prosthetic hip-replacement or artificial heart valve, for example, might possess satisfactory bulk properties such as strength and fluid mechanical capabilities, its surface properties may not maintain surface characteristics compatible with the human body's biochemical make-up. The result: inefficient implants. 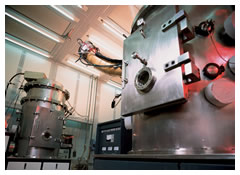 The team's solution is to obviate this potential incompatibility by modifying the surface properties of the bulk material using a technique called Plasma Surface Modification (PSM). "The unique advantage of plasma modification is that surface properties and biocompatibility can be enhanced selectively, while the bulk attributes of the materials remain unchanged," explained Professor Chu. The significance of the technique is that researchers can modify existing materials and thus negate the need to design brand new materials, a costly and time-consuming process unattractive to investors and large companies potentially interested in developing and marketing these materials.

Professor Chu was born in Hong Kong and went to the US in 1974, where he graduated with a BSc in Mathematics from Ohio State University, and an MSc and PhD in Chemistry from Cornell University. He became a full-time member of the CityU faculty in 1996. He served on the technical advisory board of Silicon Genesis Corporation (SiGen) in California's Silicon Valley from 1997 to 1998, and is currently a consultant with several companies in the US.
In cooperation with SiGen, the first full silicon-on-insulator (SOI) wafer was produced in Professor Chu's plasma laboratory using Plasma Immersion Ion Implantation (PIII), a cost-effective and relatively simple process of synthesizing thin films and altering the surface properties of materials. "Plasma and plasma-based techniques have a number of advantages," explained Professor Chu. "You can call plasma the fourth state of matter, after gases, liquids and solids. The sun, for example, is plasma, as is lightning. Some other common applications of plasma can be found in fluorescent light tubes and plasma televisions. You create plasmas by exciting gases and forming a highly reactive chemical environment in which many plasma-surface reactions occur."

The connection with biomaterials started in the mid-1990s, when teams from the Research Centre Rossendorf in Dresden, Germany, and Southwest Jiaotong University in Chengdu, China, invited Professor Chu and his research team to improve the mechanical properties and biocompatibility of biomaterials. Professor Chu's group subsequently embarked on fruitful joint commercial and research ventures with these two groups, in addition to research groups from the Lawrence Berkeley National Laboratory at the University of California at Berkeley and Northeastern University in Boston. Since 1996, Professor Chu has been awarded seven US patents on plasma technology and he and his research group have published over 180 papers in international refereed journals. Among their research accomplishments and innovations, Professor Chu and his team have reached first-stage success in showing that heart valves modified by plasma immersion ion implantation-deposition in machines they have built significantly reduce the problems of blood coagulation inherent in the use of conventional heart valves. 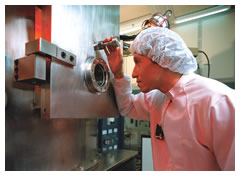 Currently, products used to treat patients with heart disease lack the biofunctionality necessary for valves, pumps and vascular prostheses used to support blocked arteries to operate with a high degree of compliance. The problem is that blood, the body's defense mechanism, does not readily recognize, or welcome, the presence of implants. This results in a higher than desired failure rate. Valves have to be replaced and patients have to take anti-coagulation thinners to prevent thrombosis.

"We don't have the right materials for working inside the heart and even the most common artificial heart valve material, low temperature isotropic pyrolytic carbon, (LTIC), is not good enough. When blood hits the surface, the blood cells react with the material causing cell denaturing and clotting, consequently blocking the heart and the blood vessels. If the surface of the materials is more friendly, the blood will be happier!"

"So far our work on modifying the biocompatibility of biomaterials has been promising. We've conducted a number of experiments to test the performance of the modified materials and we've found a significant reduction in the amount of coagulation on treated heart valves," Professor Chu explained. His group has tested on animals and found a great deal of improvement in the interaction between blood and the treated materials. Over a period of 17 days they found fewer blood cells die and clot around the artificial valves with modified surface properties.

In addition to his successes in Hong Kong and China, Professor Chu's achievements have attracted attention from scientists worldwide, such as Professors Marcela Bilek and David McKenzie of the University of Sydney in Australia. They invited Professor Chu to be co-investigator of a research programme on metal plasma implantation into biomaterials, which received funding of AUD477,000 from the Australian Research Council earlier this year.

Response to Professor Chu's investigations has been very favourable. "Obviously nothing is golden and we are only at the beginning, but clearly we can offer a great deal of hope. We've received communication and mail recently encouraging us to pursue this line of research. I got a letter from a patient in Shanghai waiting for a heart implant. He had heard about our new artificial valves through a Chinese news agency, and asked when the new valves would be ready. This kind of letter gives us a shot in the arm and the utmost determination to Ofinish' the job. The important factor to remember is we are not creating new materials. We're treating old materials. This means the process is cost-effective and more commercially viable. We're talking a few years down the line but the potential is there and the initial results are promising. We're very hopeful."