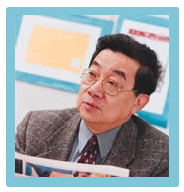 Professor Benjamin K Y T'sou, Chair Professor of Linguistics and Asian Languages and Director of the Language Information Sciences Research Centre, has been elected a member of the Royal Academy of Overseas Sciences in Belgium.

Professor T'sou's research interests have covered sociolinguistics, and computational linguistics. He was a key contributor to the Language Atlas of China, which has received the highest academic award for social sciences on the mainland.

Department of Chinese, Translation and Linguistics
Faculty of Humanities and Social Sciences