The Cultivation of Democracy

While many scholars turn democracy into a gigantic, often culturally specific package of political and economic arrangements, Professor Edward Rubin, Professor of Law of the University of Pennsylvania, offered a different approach in his public lecture on 9 April. He pointed out that democracy consists of pragmatic political arrangements that align the incentives of government officials with the desires of people.

Titled "The cultivation of democracy", the lecture was organized by the School of Law as part of the Sir Edward Youde Memorial Fund Visiting Professorship Scheme. One of the most influential socio-legal scholars in the , Professor Rubin was appointed the Consultant of the United Nations Development Programme to the People's Republic of for Administrative Law in 1992, and is currently a consultant to the Asia Foundation Project on the Administrative Licensing Law for .

In many modern administrative states, there are vast numbers of appointed public officials, and the relatively small number of elected officials cannot possibly supervise them. In his lecture, Professor Rubin suggested non-electoral mechanisms should be introduced to enable both individuals and groups of citizens to express views to this group of officials and exercise some control over their actions. 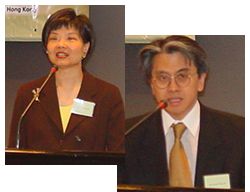 The invited two commentators to give opinions on the topic from the perspective of . Ms Audrey Eu, Legislative Councillor, commented that it is a common worry in that the introduction of universal suffrage will lead to free-meal politics. But she stated that people would act responsively if they get the responsibility to vote for their leaders. Another commentator was Mr Daniel Fung, Senior Counsel of the Hong Kong Bar. He echoed Professor Rubin and maintained that in a pluralist society, citizens expect responsiveness of decision-making bodies to public will, public participation in the decision making process and a diffused decision-making power structure.

The Visiting Professorship Scheme was established in 1995 by the Sir Edward Youde Memorial Fund Council to help strengthen 's image in the international research and academic community. The Council invites universities in to nominate distinguished scholars or researchers from the science, arts and humanities stream or the China-related topic to give lectures and postgraduate conference.