Tall buildings in Hong Kong: are they safe?

In the light of last year's tragic events of 11 September, Bulletin held a roundtable discussion on the issue of tall building safety. Our panel of experts considered the implications of the terrorist attacks on building safety and security in .

(* In his personal capacity as an engineer, his views are not necessarily those of the department )

With its large population in a relatively small area and its mountainous terrain, is in the unique position of having more tall buildings per square foot than anywhere else in the world-50,000 to date and more being built every year. And many of these buildings have their foundations in reclaimed land. So how safe are tall buildings in ?

Dr Albert So kicked off the forum with a short review of the terrorist attacks on and the subsequent collapse of the World Trade Centre (WTC). He then invited Professor S Kitipornchai to outline the probable reasons why the 110 storey twin towers were completely destroyed.

The importance of redundancy 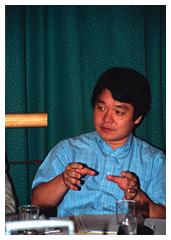 "We must first look at the force of the impact on the WTC," Professor S Kitipornchai said. The two Boeing 767 planes that hit the towers each carried full tanks of fuel, around 91,000 litres. The planes' take-off weight was 200 tons, and they cruised at a height of 10,000 metres at 850 kilometres per hour. The amount of energy to get a plane to 10,000 metres in 10 minutes is equivalent to the output of a small commercial power plant. Assuming that the planes were travelling at cruise speed and that at the point of impact all the energy was dissipated in one second, then the impact force was in the order of 400 tons.

In spite of that, both buildings withstood the impact, which was the equivalent of an earthquake of five to six on the Richter Scale. The buildings were designed to withstand an earthquake of that magnitude, as well as tornado-strength winds of up to 340 kilometres per hour. What brought them down, Professor Kitipornchai explained, was the fuel-if all the fuel detonated at once, this would be equivalent to 2.5 million sticks of dynamite. "It was a gigantic explosion that blew away significant amounts of fire protection material and exposed the steel structure to raging fires."

With the fires reaching temperatures of around 1,700!C at the flame front, and the melting point of steel being around 1,500!C, it was inevitable that the steel columns would weaken and the floors at the points of impact would collapse. "However," Professor Kitipornchai pointed out, "the fact that the buildings stood for as long as they did is a credit to the design because it allowed thousands of people to escape."

Why the towers stood for so long, when many other buildings would have collapsed immediately, is because there was a high degree of redundancy within the structure, he said. (Redundancy refers to buildings with a number of load paths, which will not collapse if one or two columns are destroyed.) Even with part of the structure destroyed, the load was redistributed until the fire damage was such that the affected floors collapsed upon themselves. "If we assume that the floor at level 70 were to collapse with the weight of all the remaining floors above it onto the 69th floor, the impact force is around 30 times the weight of the floor itself-a lot more than static gravity force. No structure could withstand that force, which is why the towers just pancaked within about nine seconds from the time they started to collapse," Professor Kitipornchai explained.

The question is, he asked, whether buildings could be better designed against such an attack. "I would say not. It's very difficult to imagine any building, other than a nuclear power plant, that could withstand this sort of force." Any commercial building so designed would be very expensive and very ugly.

So what is the solution? Improve building safety in terms of escape routes? Improve fire protection? Build in a greater degree of redundancy? 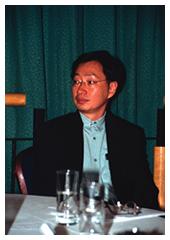 With that, the panel considered the first sub-topic: Limitations in existing buildings relating to disaster escape.

Dr S M Lo said that when the WTC was bombed in 1993, the US government researched escapes from tall buildings and discovered that it took people between one to three hours to get out. Professor Kitipornchai pointed out that each tower had only three fire escape stairs, which appears inadequate, especially as the firefighters were using the stairs, too.

This was an exceptional case, however, Mr Stephen Lee said. Normal fires would be controlled locally and in Hong Kong we wouldn't expect to face a similar fire hazard. Mr W S Wong agreed: "Buildings in Hong Kong now have very stringent fire safety requirements. The biggest problem for us is maintenance of fire safety devices in old buildings."

Mr Wong wondered whether concrete is better than steel in terms of redundancy. Mr Lee said that these days the construction industry in Hong Kong uses a concrete core wall inside with surrounding steel columns, which helps prevent progressive failure, even in tall buildings. Professor Kitipornchai agreed that reinforced concrete would have performed better than steel in the WTC, especially as the fireproofing round the steel would have been blown away by the impact. But even if the buildings had been constructed differently, nobody could predict what effect being struck by a plane would have. "You have to remember that terrorists attacked the WTC before in the basement but the building remained standing. This time they did the maximum damage at the right place in both buildings and caused them to collapse."

Professor Frederic Williams argued that there is a basic fallacy in thinking that tall buildings don't collapse. "Buildings are built to last a long time and we can't predict the political future anything like that far ahead. Any city in the world could actually become the target for this sort of attack." He believes we should consider external escape routes from tall buildings, so that people have a means of getting round a fire.

Moving on to the second topic: Existing technologies or technologies under research to tackle these problems, the panel considered new structural designs to resist heat and explosion, and heat resistant building materials.

It would be very difficult and unviable to design the kind of building that could resist this form of attack, Professor Kitipornchai pointed out. The alternative is to design buildings with a high degree of redundancy and make them as fire resistant as possible. "Certainly we can look at materials more heat resistant than steel but I'm not sure that they'd have the strength of steel or be able to resist an explosion."

Mr Lee said that there is research underway on a high resistant anti-fire film that could be applied to main structural elements but not to secondary elements such as internal beams. Regardless of local collapse, the building would remain stable, giving people the chance to escape. "But we need to have a balance," he pointed out. "Although it is technically possible to increase fire protection time to four hours, fire protecting steel is very expensive-up to 50% of the cost of steel-and we have to consider that."

The panel agreed that it would be possible to lengthen the time before a building collapsed but that to do so would either vastly increase the cost or involve designing a building with massive concrete columns. 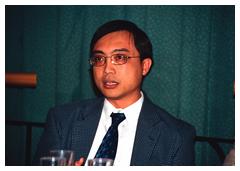 Dr So then asked the panel to comment on his proposal for escape lifts, a project he and Dr Lo have been researching for some years (see related story on page 46).Assuming a building 60 to 70 storeys high is allocated one refuge floor for every 15 stories, if there were four groups of lifts enclosed within a safe chamber, the round-trip time for the lifts to take people to the ground floor would be only one or two minutes. "The lifts would operate under computer vision based intelligent control, and would be high-capacity, waterproof, spark-proof, explosion-proof and chemical-proof," he explained. "They would be powered by electricity and the generators would be independent and protected-two, in case one breaks down."

Professor Michael Hung suggested designing a lift based on gravity, using counterweights, to avoid having to use electricity. Professor Williams agreed, pointing out that Hong Kong's Peak Tram works on this basis. "You could put the power supply in at the bottom, making it completely immune to what happens in the building."

One of the most important considerations in evacuating a building is the behaviour of the occupants. Dr Lo told the panel that research showed that people are more in control and less likely to panic if they are given information on what is happening. Professor Kitipornchai stressed the importance of regular fire drills. An efficient broadcasting system is also essential, Mr Lee said, because people tend to ignore fire drills.

The problem of cost

Finally, the panel discussed the potential difficulties in implementing new building technologies in . One of the major problems is cost, everyone agreed. Dr K C Wong pointed out that if the suggestions were implemented and the cost of a building doubled, then the rents would have to be increased by 50%. The general feeling is that tenants may prefer not to move into tall buildings, even those with high-cost safety features, at least for the foreseeable future.

Professor Williams believes that one of the things engineers have to do is to make people conscious of risk. "There has to be an element of risk-you cannot reduce it to zero in buildings," he said. In , the risk is not enormous and there shouldn't be a panic to do things to existing buildings. Future buildings could be made safer but they will never be totally safe. He also believes tall buildings built for reasons of prestige rather than straight economic reasons have had their day. "Build less high and have the advantages of having people grouped together that you do in high-rises by linking lower-rise buildings at more than one floor level," he suggested.

Although Hong Kong may have no choice but to continue erecting tall buildings, for Professor Hung the concern is not so much attack by terrorists as the possibility of building collapse because of our steep slopes, use of reclaimed land and building fatigue from battering during typhoons. Recent revelations of irregularities, such as short pilings, in building construction, have also caused alarm.

Although infrared, followed up by human inspection, is currently used to detect building faults, neither technique is reliable, Professor Hung said. He is currently researching a new technique based on detecting stress, which he hopes will be CityU's contribution to building safety in .

In conclusion, the participants agreed that although and the mainland are not likely to experience the type of terrorist attack that caused the collapse of the WTC in the foreseeable future, improving building safety and evacuation methods in case of fire or other disaster are a definite concern for engineers involved in designing the buildings of the future.