The chances of a major fire in one of 's skyscrapers are remote. Regular drills, state-of-the-art fire fighting systems and a regiment of highly-trained firemen mean the kind of fire Paul Newman had to deal with in the film Towering Inferno is unlikely.

, an Associate Professor in the Department of Building and Construction at City University, explained that fire grows from a small seed and that Hong Kong's comprehensive fire detection systems work to detect these seeds before they blossom.

"Of course, arsonists, terrorists or natural disasters such as earthquakes are unpredictable factors that can never be fully eliminated, but compared to many countries around the world Hong Kong remains relatively safe," he said.

Nevertheless, fire remains a threat and everyone is familiar with the sign carried in elevators around the world: "In case of fire, do not use the lift". If fire breaks out, chances of survival are considerably higher if you descend on foot because elevators increase the risk factor, many experts claim. Lifts can trap smoke, and suffer mechanical failure or a power cut if a building is on fire. The traditional attitude is that lifts are a means of transportation, not a means of escape.

Dr So, though, believes a radical rethink of government regulations is required because existing safety procedures in high-rises are gradually becoming out-dated. Buildings are getting taller and subsequently people require higher levels of fitness and mobility to escape. While an able-bodied person requires between 30 to 45 minutes to descend 80 storeys, young children, people with physical disabilities and the elderly need longer.

Revolutionizing evacuation procedures
In response to the growing need to reflect advances in high-rise construction and to ensure as many people as possible can be evacuated in the shortest possible time, Dr So has initiated a series of fire safety designs that he hopes will revolutionize evacuation procedures through the use of elevators.

That elevator systems are not a popular area of research in tertiary institutions in Hong Kong does not deter Dr So. He was the only Asian to sit on the Steering Committee to revise the Guide D on Vertical Transportation of the Chartered Institution of Building Services Engineers of the UK. He is also an Executive Board Member of the International Association of Elevator Engineers (IAEE) Conference and has been the Founding General Secretary of the Hong Kong-China Branch of the IAEE since 1994. He began his career as an electrical and mechanical engineer in the Hong Kong government's Electrical and Mechanical Services Department and joined City University in 1990.

He believes that an essential feature of fire escape lifts is that they should only stop at refuge floors. Refuge floors are location points where people are required to gather in the event of a fire and since 1996, super high-rise buildings have been required by law to provide refuge floors at 15 to 20 storey intervals under the Hong Kong Code of Practice on Means of Escape in Case of Fire. By reducing the number of stops, the elevators can travel between refuge floors and the ground much faster because certain time-delay factors have been removed: acceleration and deceleration between stops, transfer time of passengers into/ out of lifts, and opening/ closing doors. A reduction in the number of stops will reduce the round trip time to an average of 40 seconds. The round trip time is the time needed for the lift moving at, for example, 10 metres per second to travel to a specified refuge floor, collect evacuees and return to the ground floor. Since trips to the top floors will take longer than trips to the lower floors, an average time of 40 seconds is a feasible target. This means that if each lift carries 20 people, approximately 900 people can be evacuated in 30 minutes. Theoretically, with four lifts in operation at each corner of the building, about 3,600 people escape in half an hour.

Remembering the World Trade Centre Towers on 11 September 2001 stood for nearly 45 minutes after the planes crashed and noting the number of people who died, these figures are compelling. "And remember not everyone will take the lift. Some are young and healthy and might walk down," added Dr So.

Additional use of computer vision-based intelligent control means the lifts will respond to the emerging situation by ensuring that lifts stop at refuge floors with the greater number of evacuees. Once the car is full, it will descend to the ground floor immediately, and if evacuees are kept informed of car positions, anxiety levels will be reduced, thus lessening the risk of panic. 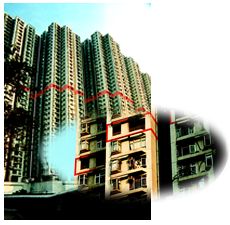 Psychological factors play an important role in public safety procedures and in high-risk situations panic is commonplace. Without adequate training and lacking in confidence in a new system, some people will inevitably lose patience and any ensuing breakdown in order may prevent lift doors from closing. Dr So's solution is the use of safety chambers. The chamber allows evacuees to enter a single file entrance with double file width. The concrete walls of the chamber possess two hours FRP (fire resistance period) ensuring the opening and closing of lift doors will not be compromised. Evacuees at the front of the queue are unlikely to jeopardize evacuation if they are next in line.

Additional features increasing levels of safety include designing lifts that are smoke and flame proof, backing up each lift with two independent generators, and the introduction of frequent fire drills to train people in a new approach to fire safety. "We've been asking people for decades to walk down the stairs if there is a fire so it would be a big change and people need training as well as reassurance," Dr So said.

These psychological considerations, though, are not the only obstacle to implementing the use of fire escape lifts. Finance is a major problem. "Fire escape lifts add 50% more to the construction of the elevator system in a building and it might take five to 10 years before people are convinced that spending the extra money on safety is a worthwhile investment," explained Dr So. "Under normal situations it is impossible that we'd have a big fire in Hong Kong because our fire rules are quite strict. The only possibility is industrial fire or terrorists. So it is difficult to persuade developers to spend the extra cash to build lifts to help people escape."

Another problem is the reluctance of the political powers to support a radical alteration to fire safety. "Politicians are very conservative and do not like too much change. They like the status quo. They know they will be blamed if they encourage people to use fire escape lifts and something goes wrong."

Change will only take place if the issue is kept at the forefront of public consciousness, said Dr So. Politicians and developers are invited to all the IAEE conferences and support is strong in Europe, Australia and North America.

"Basic fire policy is that if there is a fire, walk down the stairs. But I believe we have the technology and capability to design and implement fire escape lifts that will save more lives in the future."