Shanghai owned the "Pearl of the Orient" moniker for much of the 20th century - but now, a CityU exhibit utilizing the latest developments in multimedia technology has demonstrated that Hong Kong is clearly this century's oriental pearl. 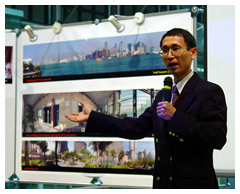 The exhibit, 21st Century Oriental Pearl, featured 10 sets of digital and audio-visual artwork that captured the best images of Hong Kong. The multimedia exhibit - using cutting-edge multimedia "Live Picture" technology - was created by students in the Department of Manufacturing Engineering and Engineering Management's (MEEM) Digital Studio course. The exhibit was held on 1 to 2 December in the Academic Building Mall.

"Live Picture" technology is able to simulate a 360-degree environment or a three-dimensional space from standard two-dimensional photos. Add sound to the 3-D images and viewers can enjoy a near-realistic experience.

"Students have used the enhanced version of this leading audio-visual technology to design a series of artworks to capture the best images of Hong Kong," said Dr Ralph Ip, a MEEM Associate Professor. "Live Picture is an innovative, dynamic, graphical technology that can accommodate various types of multimedia to form an integrated virtual reality environment."