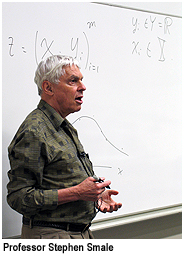 In his brilliant lecture, “Data and Learning”, Professor Smale gave a fascinated and appreciative audience an introduction to learning theory that emphasized its mathematical foundations. 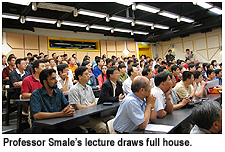 Professor Smale is Honorary Professor of Mathematics at CityU and Emeritus Professor at the , . He received the Fields Medals, the mathematics’ equivalent to the Nobel Prize, in 1966. He is also a recipient of the American National Medal of Science, the highest honour for a scientist in the , and of many other prestigious awards. His research interests include fields as diverse as complexity and computational mathematics, chaos and dynamical systems, macro-economics, or differential topology.

The William Benter Distinguished Lecture Series brings to CityU three or four internationally recognized mathematicians annually, with the aim of making available to pure and applied mathematicians the latest results and thinking in areas of outstanding interest. The first lecture was delivered by Professor Roger Temam of the Université Paris-Sud and Indiana University Bloomington on 26 January. The third lecture, entitled “Geometry, from Uniqueness to Abundance”, will be given by Professor Jean-Pierre Bourguignon, Director of the Institut des Hautes Etudes Scientifiques, on 15 June.

The Liu Bie Ju Centre is headed by Professor Roderick Wong, CityU’s Dean of Research and Graduate Studies and Chair Professor of Mathematics. The Centre also organizes major international conferences, workshops and colloquiums, to facilitate and promote academic and professional exchanges in pure and applied mathematics.