​Mangroves are as important to the natural environment as kidneys are to humans, explained Professor Nora Tam Fung-yee, Chair Professor of Biology in the Department of Biology and Chemistry at City University of Hong Kong.

Professor Tam was speaking at the latest talk in the on-going President’s Lecture Series: Excellence in Academia on 21 April. 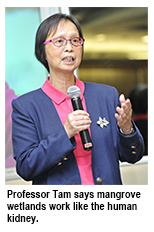 “Mangroves offer diverse habitats, breeding sites and feeding grounds for a large variety of coastal and marine species, such as juvenile fish, crabs, shrimps and mollusks, and provide prime nesting and migratory sites for hundreds of bird species and wildlife,” Professor Tam said.
Just as kidneys act as a powerful factory for removing waste products from our metabolism, toxins from our blood, drugs and excess fluids, mangroves remove harmful materials from water, and dilute and filter pollutants from industrial waste.
Mangroves, like kidneys, also retain nutrients that are vital for growth and sustainability.
One of CityU’s most distinguished scientists, Professor Tam has won several awards over the years, including many prizes at the China Hi-Tech Fairs. As Director of the Futian-CityU Mangrove Research and Development Centre in Shenzhen, she has been researching mangrove wetlands for more than 20 years.

The key feature of mangroves, which are usually found in sheltered inter-tidal areas in tropical and sub-tropical regions of the world, is they possess extensive root systems and large root biomass capable of mitigating the impact of human-made pollution such as oil spills and treating sewage in the surrounding areas.
Their use for humans, and for ecology, is that they can tolerate and immobilise toxic contaminants such as heavy metals and other contaminants in a cost-effective and environmentally friendly way, and can inspire the construction of wetland technology for wastewater treatment and the bioremediation of contaminated environments.
In other words, mangrove wetlands have an enormous impact on the environment, on ecology, on sustainability and offer insight into how to mitigate pollution issues.
“Mangrove wetland should be protected. After all, we look after our kidneys, but if you have kidney failure you can get a transplant. But you cannot have a transplant for a mangrove ecosystem!” Professor Tam said.