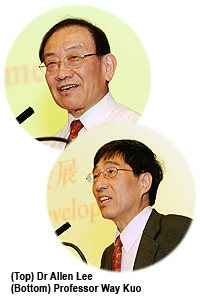 Professor Way Kuo, CityU President, said in his welcoming address that it was a great honour for CityU to have Dr Lee deliver his lecture at the University. Dr Lee, popularly known as “Brother Fei”, has been highly regarded by the local business and political communities for his contributions and service over many years.

Dr Lee’s lecture, titled “Hong Kong Political Development”, attracted 300 people from both within and outside the University. Speaking in his usual incisive style, Dr Lee analysed the current political environment in Hong Kong and discussed the governance issues faced by the Chief Executive, and whether the functional constituency of the Legislative Council should be abolished. He also pointed out that the government’s 18 undersecretaries and political assistants, who are responsible for managing political issues, should expose themselves to the public more, as opposed to maintaining their very low public profile. 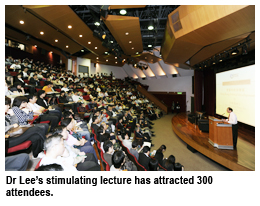 Notwithstanding his comments on Hong Kong’s political development, Dr Lee highlighted the issue that most concerned him: how can Hong Kong maintain its competitive edge in the face of challenges posed by other mainland cities, especially Shanghai? He pointed out there are 6.5 million university students graduating each year on the mainland, which means 65 million university graduates in 10 years. They will be the major driving force behind mainland development.

“It is very important for Hong Kong to nurture talent and we should put more energy and time into our education system,” said Dr Lee, who is confident about the long-term development of Hong Kong. “Hong Kong used to be just a barren rock. The accomplishments of Hong Kong today are attributed to its people’s courage and insistence on fighting through difficult times.” 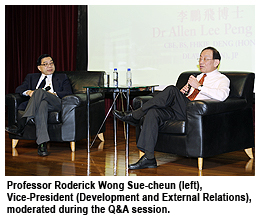 In regards to future political development, Dr Lee emphasised that a political leader should truly care about and be accountable to Hong Kong citizens, as “only such valued authorities deserve respect.”

Dr Lee stressed that he was not pessimistic about the political development of Hong Kong, but believed he should expose existing problems in the system in the hope that more discussion could be generated to solve them. Dr Lee once served as the Deputy Chairman of the CityU Council and is now a member of the University Court.