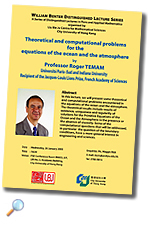 As the first in the William Benter Distinguished Lecture Series on pure and applied mathematics launched by CityU's Liu Bie Ju Centre for Mathematical Sciences (RCMS) on 26 January, Professor Roger Temam of the Université Paris-Sud and Indiana University Bloomington (IUB) presented "Theoretical and computational problems for the equations of the ocean and the atmosphere". The Lecture was officiated by Professor Roderick Wong, CityU's Dean of Research and Graduate Studies, Professor (Chair) of Mathematics and Director of the RCMS, and Fellow of the Royal Society of Canada. 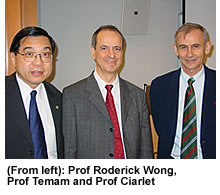 "The Liu Bie Ju Centre for Mathematical Sciences was established in January, 1997 and in the past eight years, we have had many distinguished visitors," Professor Wong said. "With a generous donation from philanthropist Mr William Benter recently, we decided to launch this distinguished lecture series and invite even more mathematicians of global repute to CityU." Professor Philippe Ciarlet, a Member of the French Academy of Sciences and Professor (Chair) of CityU's Department of Mathematics added, "The aim of the lecture series is to make available to pure and applied mathematicians, from CityU as well as from the other universities in Hong Kong, the latest results in current issues of outstanding interest. Clearly, such high-profile lectures greatly reinforce the CityU's international reputation as a leading centre in Pure and Applied Mathematics."

Mathematical questions also relevant to engineering and the sciences 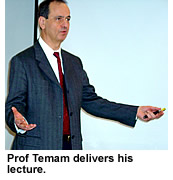 In his Lecture, Professor Temam, a recipient of the Jacques-Louis Lions Prize, of Sciences, introduced some theoretical and computational problems encountered in the equations of the ocean and the atmosphere. The theoretical results included results of existence, uniqueness and regularity of solutions for the Primitive Equations of the ocean and the atmosphere in the presence or the absence of viscosity. Some of the computational questions addressed, the question of the boundary conditions in particular, were also of general interest to engineering and the sciences. 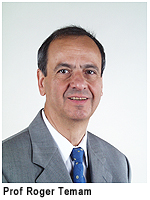 Professor Temam received the Seymour Cray Prize in Numerical Simulation, France, in 1989, and he received prizes from the French Academy of Sciences in 1977, 1993 and 2003. He was made an Honorary Professor of Fudan University, Shanghai, in 1996. Professor Temam is Director of the Institute for Scientific Computing and Applied Mathematics at IUB. Author of over 200 articles published in professional journals, Professor Temam has written five books and co-authored three. 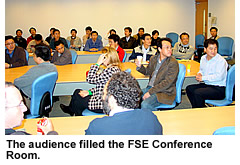 The next speaker in the Series will be Professor Steve Smale, Fields Medalist and Honorary Professor of Mathematics at CityU, who is to visit in June. Professor Jean-Pierre Bourguignon, Director of Institut des Hautes Etudes Scientifiques and Professor Haim Brezis of Université Pierre et Marie Curie have also been invited to participate in the Series. The RCMS will invite three or four speakers for the William Benter Distinguished Lecture Series annually.

In addition to organizing international conferences, the RCMS has bi-weekly colloquiums on applied mathematics. RCMS members include professors from CityU's Mathematics, Building and Construction, Computer Science, and Electronic Engineering departments, and its external membership comprises professors in the mathematics departments of Hong Kong Baptist University, The Hong Kong University of Science and Technology, and The Chinese University of Hong Kong.