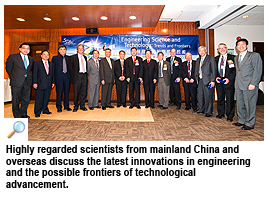 City University of Hong Kong (CityU) is co-hosting, with the Chinese Academy of Engineering (CAE), the academician conference “Engineering Science and Technology: Trends and Frontiers” from 14-15 December. It will bring together engineers who have played a pivotal role in huge-scale projects in China and other highly regarded scientists to discuss the latest innovations in engineering and the possible frontiers of technological advancement.

China’s epic Yangtze River hydraulic project, the world’s highest railway from Qinghai to Tibet and manned spaceflights are some of the projects that have contributed significantly to the quality of life and national development of China. Engineers and other influential scientists at the conference from the East and West will exchange new ideas on developments in the engineering field. 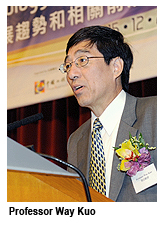 In his opening remarks, Professor Way Kuo, CityU President, said, “China is doing so well today and much of the credit for that should be given to engineers, many of whom are here today. It is a great honour to have so many distinguished speakers share their experience with us at CityU.” Professor Kuo told the press that the academician conference was held not only to commemorate the silver jubilee of CityU but also to raise public awareness of the importance of science and engineering and to promote development in these areas in Hong Kong.

Academician Wang Jiming, Deputy Director of CAE’s Division of Engineering Management and the conference co-convenor, said our planet is currently facing grim challenges such as energy shortages and environmental deterioration and people are working hard to make new breakthroughs based on intensified research. “We believe it was a forward-looking idea for President Kuo to propose this forum on the 25th anniversary of CityU. By offering collective intelligence in our field, this forum is necessary, timely and appropriate for future engineering reforms, innovation and discussion.” 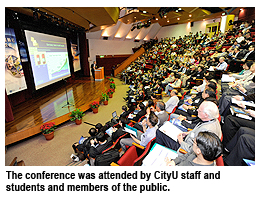 Professor Roderick Wong Sue-cheun, Vice-President (Development and External Relations) of CityU and conference co-convenor, said engineering developments in aeronautics, aerospace, the automotive industry, communications, energy technology and hydraulics over the course of the last century have had a profound effect on individuals, society and the economy.

“Co-organising this academician conference with CAE, the most prestigious and informative advisory institution in Chinese engineering science and technology, reflects the commitment of CityU to achieving a level of excellence in education, research and technological innovation and attests to the high standard of the University’s engineering research,” Professor Wong said.

The conference is the final instalment in a four-conference series, “Science for the Future: A World-class Summit”, marking the Silver Jubilee of City University of Hong Kong.