City University of Hong Kong (CityU) hosted an academician conference “Energy and Environment: Crisis, Opportunities and Challenges” on 5-6 November, bringing together distinguished academicians from around the world to offer new insights into the formulation of future energy and environmental policies that are of particular significance to Hong Kong and mainland China. 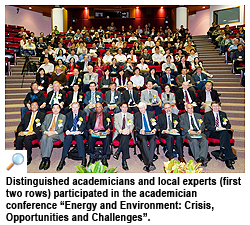 The conference examined the root causes leading to the energy and environmental crises confronting the world. It also looked at emerging opportunities and ways to balance the conflicting demands of environmental protection and energy production. 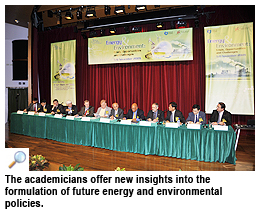 Most speakers said that local governments had to put political will to implementing and enforcing solutions to environmental problems. There would be technical problems to be solved, such as finding new energy production technologies like nuclear fusion, but they would not be as challenging as political problems. Experts from Hong Kong pointed out that, while government support would be beneficial, different sectors could actually work on energy saving even without the government’s involvement. There are some business organisations, for example, promoting energy saving measures in Hong Kong.

China is witnessing rapid social and economic development and urbanisation has a huge impact on the environment. According to the experts, city growth could offset all the energy saving initiatives. Therefore, a new mindset was needed for developing a city. For example, many people in China regard owning a car as a sign of improvement in quality of life. Educating the public to change their attitude and life style is as important as developing energy saving technology.

One speaker pointed out that universities play an important role for cross-disciplinary research to create sustainable opportunities. At the same time, other stakeholders from the industry, science and engineering sectors and the government should also be engaged. CityU is well aware of such opportunities, hence the establishment of the School of Energy and Environment. 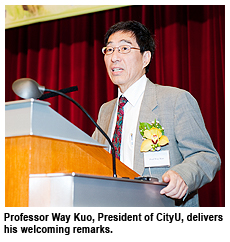 On the first day of the conference, Professor Way Kuo, President of CityU, thanked the distinguished scholars for travelling from all corners of the globe for the conference, following the introductory message by Professor Roderick Wong Sue-cheun, Vice-President (Research and Technology).

“CityU is a young and energetic university and it has been developed into a world-class institution. CityU is also a clean, neat and energy efficient university. I am sure this conference at CityU will generate many solutions to pressing energy and environment problems,” Professor Kuo said.

Conference convener Professor Rudolf Wu pointed out that the HKSAR Government included environmental industries in its recent Policy Address as one the six industries crucial to the development of the Hong Kong economy. With the participation of a number of local and overseas experts, he believed this conference would be able to inspire new directions in energy and environmental policymaking.

“Energy and Environment: Crisis, Opportunities and Challenges” is the third in the four-conference series “Science for the Future: A World-class Summit”, organised to mark CityU’s silver jubilee. Bringing together top academic elites to study the advancement in various scientific fields and its implications on society, the conference series strengthens the collaboration between CityU and prominent scientists and promotes CityU’s development in related fields. The last conference, co-organised with the Chinese Academy of Engineering, will be held in December, titled “Engineering Science and Technology: Trends and Frontiers”.