Science summit unravels secrets of how the brain learns and memorises

An academician conference featuring some of the best brains in the world was held at City University of Hong Kong (CityU) today to unravel the secrets of how the brain learns and remembers. 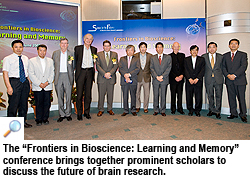 Seven prominent scholars from around the world converged at the “Frontiers in Bioscience: Learning and Memory” conference to shed light on neuroscience advances that could help enhance memory and brain function. They included Nobel Laureate Professor Susumu Tonegawa, and renowned academicians Professor David Anderson, from the California Institute of Technology; Professor Duan Shumin and Professor Guo Aike, of the Chinese Academy of Sciences; Professor Roger Nicoll, University of California, San Francisco; Professor Poo Mu-ming, University of California at Berkeley; and Professor Dr Wolf Singer, of the Max Planck Institute for Brain Research.

The speakers shared with the audience their latest endeavours in unravelling how the very engine behind all scientific progress - our brain - learns and remembers, two vital attributes of human intelligence. Among them is a recent discovery by Professor Tonegawa and his research team of a specific brain circuit that plays a crucial role in the conversion of short-term memory to long-term memory. 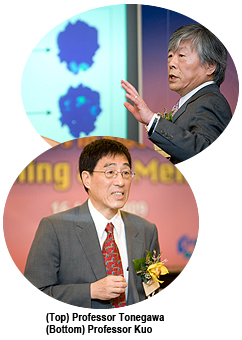 Speaking at the opening ceremony, Professor Way Kuo, President of CityU, said the “Frontiers in Bioscience: Learning and Memory” conference provided an excellent platform for neuroscience experts to discuss the exciting future of brain research that will have a tremendous impact on society.

“CityU, as a forward-looking institution dedicated to advancing the frontiers of knowledge, is well positioned to explore the far-reaching implications of scientific progress in this area,” Professor Kuo said.

The “Frontiers in Bioscience: Learning and Memory” conference is the first in the four-conference series “Science for the Future: A World-class Summit” orchestrated by Professor Roderick Wong Sue-cheun, Vice-President (Research and Technology) and Dean of Graduate Studies, to mark the silver jubilee anniversary of CityU. It brings together top academic elites in several diverse and cutting-edge scientific fields.

Professor Kuo said in the course of these 25 years, CityU’s research achievements had forged a reputation of international standing that had allowed it to stage such a prestigious summit. 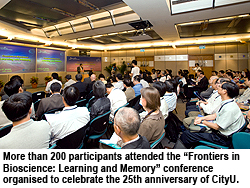 “The 2009 science summit will not only promote collaboration between the world’s foremost scientific minds but also help the host university, CityU, accelerate its strategic growth in each of these areas,” said Professor Kuo.

In addition to the “Frontiers in Bioscience: Learning and Memory” conference convened by Professor Michael Yang Mengsu, from the Department of Biology and Chemistry, three more conferences will be held in October, November and December on the advancement of science, energy and environment, and engineering science and technology, each of which bears enormous relevance to the future of mankind.