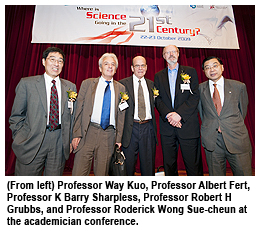 City University of Hong Kong (CityU) is hosting an academician conference "Where is Science Going in the 21st Century?" on 22-23 October, featuring talks presented by three Nobel laureates and 11 world-renowned academicians. Joining them at the conference were a host of experts and scholars discussing the future directions of scientific advancement.

As one of the signature events for CityU’s 25th anniversary, the conference presents an array of leading scholars exploring the future course of science development in the 21st century and looking at issues that have significant impact on the wellbeing of society. Among topics under the microscope are the relationship between science and society at large and the role of education policy in propelling scientific discoveries. 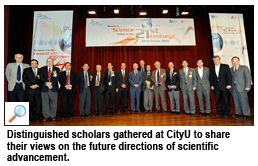 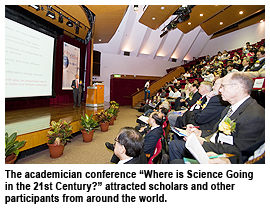 In addition to keynote speeches, two panel discussions were held to explore the role of education policy in spawning great scientists and the relationship between science and society. Participants discussed how the education policies in Hong Kong, mainland China and Taiwan should promote scientific discoveries and nurture more scientists. Also on the agenda was the important role undertaken by science to support the sustainable development of society.

In his welcoming address, CityU President Professor Way Kuo said, “The remarkable progress in science of the past centuries has changed the world in many fundamental and practical ways. It is CityU’s honour to bring together some of the best minds in science from all over the world to look at the application of scientific knowledge and the impact of science on society.”

Professor Roderick Wong Sue-cheun, Vice-President (Research and Technology) and coordinator of the conference, said the exploration of the trajectory of science development has particular implications for Hong Kong. "Assembling world-acclaimed academicians to meticulously examine the role of science in promoting sustainable development of society, the conference not only consolidates the function of CityU as a professional education centre, but also has a positive impact on Hong Kong’s education policy for the benefit of producing scientists."

"Where is Science Going in the 21st Century?" is the second in the four-conference series “Science for the Future: A World-class Summit”, organised to mark the silver jubilee anniversary of CityU. Bringing together top academic elites to study the advancement in various scientific fields and its implications on society, the conference series strengthens the collaboration between CityU and prominent scientists and promotes CityU’s development in related fields.

The other two conferences titled “Energy and Environment: Crisis, Opportunities and Challenges” and “Engineering Science and Technology: Trends and Frontiers” will be held in November and December respectively.

Science summit unravels secrets of how the brain learns and memorises