“Cosplay” is a current trend, referring to young adults who dress in themed costumes to assume the persona of characters from Japanese comic books, animated cartoons and videogames. What motivates them to dress in such extraordinary costumes? Dr Anne Peirson-Smith, Assistant Professor of the Department of English, and Dr Katrien Jacobs, Assistant Professor of the Department of Media and Communication, received funding from the Research Grants Council General 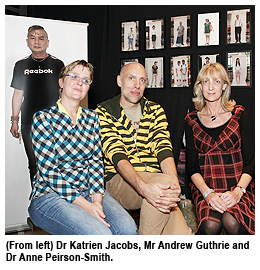 “This is the first government funded research into Cosplay,” said Dr Peirson-Smith. “We are finding in our investigations that amongst these costumed tribes there is a strong social connection and sense of belonging. Young cosplayers who dress in unique outfits, some of which may be quite outrageous, are perhaps making a powerful statement about who they would like to be, and who they don't want to be.”

To further discuss the transformative power of dress, costume and fashion, “The Extra/ordinary Dress Code: Costuming and the Second Skin in Asia International Symposium” was organised by the Department of English at CityU from 8 to 10 December. Artists, scholars and writers from North

In his opening remarks, Dr Rodney Jones, Associate Head of the Department of English, said, “The symposium contributed to the development of the department’s strength in cultural and creative studies that includes works in film, advertising, popular culture, fashion, literature and creative writing.”

“Fashion is a form of communication,” said Dr Peirson-Smith, also one of the symposium conveners. “Costumes and dressing up are not at all abstract notions as they affect all of us in our daily roles, from office workers to punks, goths, hip-hoppers and cosplayers.” As creativity is an important trait that employers look for, the department helps to enhance c 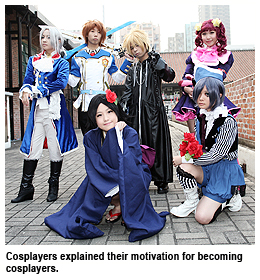 reativity by organising a variety of activities for students.

In addition to the symposium, an exhibition entitled The Rest of Us was being held at the Cattle Depot Artist Village until 24 December. It showcases the photographs of ordinary Hong Kong citizens with extraordinary outfits and local hand-made Cosplay costumes. The photographer is Mr Andrew Guthrie, an artist and curator.