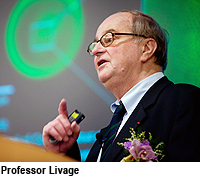 Professor Jacques Livage of Collège de France, Paris, delivered a lecture in the France-Hong Kong Distinguished Lecture Series, a series of high-profile lectures co-organised by the French Academy of Sciences, the Consulate General of France in Hong Kong and City University of Hong Kong (CityU). The theme of the lecture, entitled “Bio-inspired Nanostructured Materials”, is “soft chemistry”, which allows the low temperature formation of glasses and ceramics.

The lecture is one in a series of distinguished lectures taking place at CityU, given by world-renowned scientists at the cutting edge of their chosen fields. It is part of the celebration programme of the 25th anniversary of CityU.

Professor Roderick Wong Sue-cheun, Vice-President (Research and Technology) and Dean of Graduate Studies, welcomed the guest speaker before Professor Way Kuo, University President, paid special tribute to the joint efforts made by the co-organisers that allowed such luminaries as Professor Livage to visit CityU and deliver such high-level talks. 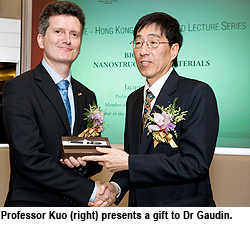 Dr Benoit Gaudin, Attaché for Academic and Linguistic Affairs at the Consulate General of France in Hong Kong, emphasised that the ongoing lecture series presented a wonderful opportunity to build one more bridge between France and Hong Kong in terms of high-level research exchanges.

Professor Livage outlined how new chemical syntheses known in French as “chimie douce”, or “soft chemistry”, have been developed in the past decades, thus allowing the low temperature formation of glasses and ceramics. They open fascinating new possibilities for materials science and biotechnologies.

“Nature offers a wide variety of nanostructured biomaterials that are highly competitive with our most advanced materials,” said Professor Livage. “Diatoms for instance, the most common types mostly unicellular phytoplankton, are known to build a silica skeleton that exhibit an incredible variety of genetically controlled architectures. Moreover, these micro-algae make their bio-glasses at room temperature while our glasses 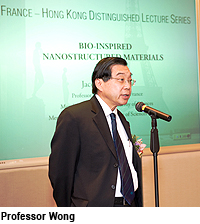 are made from molten silica sand heated well above 1000°C. This is a real challenge for materials scientists who are trying to mimic nature in order to produce better advanced nanomaterials,” he said.

The lecture went on to present an overview of the most recent developments in the field of bio-inspired nanostructured materials.

Two other distinguished scholars from France, Professor Pierre Corvol, President and Chair of Experimental Medicine, Collège de France, and Professor Albert Fert, 2007 Nobel laureate in physics and Professor at the University of Paris-Sud, will deliver the seventh and eighth lectures of the series on 7 May and 21 October, respectively.