The series of lectures, entitled “Constitutional Dynamic Chemistry for Bioorganic and Materials Chemistry”, took place as part of the agreement 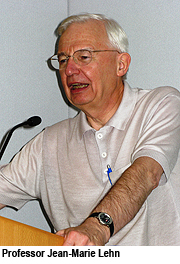 forged between CityU and Collège de France in Paris for the purpose of promoting academic exchange and collaborative research projects between the two institutions.

Professor Lehn’s lecture was the first in a series of distinguished lectures taking place at CityU in coming weeks involving world-renowned scientists at the cutting edge of their chosen fields.

Introducing the 1987 Nobel Laureate for Chemistry and outlining his academic and research achievements to those in attendance, Acting Head of the Department of Chemistry and Biology, Dr Kwong Hoi-Lun, described it as a great honour for the University to host Professor Lehn.

“This marks the second visit to CityU of Professor Lehn and, just as significantly, represents a major evidence of the standing of CityU in scientific education,” said Dr Kwong.

Professor Lehn received the Nobel Prize, together with Professor Donald Cram and Mr Charles Pedersen from the United States, for their pioneering work in supramolecular chemistry. Their innovative

research was the premise for an entire new field in chemistry and today plays a central role in numerous disciplines, including molecular biology and nanotechnology.

“A rich variety of novel architectures, processes and properties may be expected to result from the blending of molecular and supramolecular dynamic chemistry with bio-organic materials and chemistry,” explained Professor Lehn.

CityU will also host lectures by other leading academics in November, including another Nobel laureate. Professor Claude Cohen-Tannoudji will deliver six lectures from 17-28 November. The laureate of the 1997 Physics Nobel Prize will focus on ultracold quantum gases, and builds upon lectures series given by him in March and November last year. These lectures are part of the same exchange agreement between CityU and Collège de France that brought Professor Lehn to Hong Kong.

The fifth France-Hong Kong Distinguished Lecture Series visit, on 5 November, will be made by 1994 Fields Medallist, Professor Jean-Christophe Yoccoz of the Collège de France. His lecture is titled “Random Behaviour of Deterministic Systems”.

On 7 November, Professor Sir Michael Berry, Professor of Physics (Emeritus), Department of Physics, Bristol University, UK will deliver a lecture for the City University Distinguished Lecture Series on “Hamilton’s Conical Refraction: A Diabolical Singularity in the Physics of Light”.