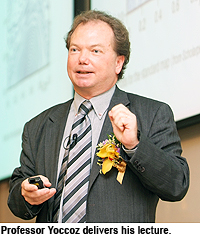 Fields Medallist Professor Jean-Christophe Yoccoz, of Collège de France, Paris, delivered the fifth lecture in the France-Hong Kong Distinguished Lecture Series on 5 November 2008. This series is co-organised by the Consulate General of France in Hong Kong, the French Academy of Sciences and CityU.

The lecture, entitled “Random Behaviour of Deterministic Systems”, was one in a series of distinguished lectures taking place at CityU, given by world-renowned scientists at the cutting edge of their chosen fields. It is part of the celebration programme of the 25th anniversary of CityU.

Professor Roderick Wong Sue-cheun, Vice-President (Research) and Dean of Graduate Studies, welcomed the guest speaker and described his lecture as being both an honour and a wonderful opportunity for staff and students to gain a greater understanding into this fascinating field of mathematics.

Introducing the Fields Medallist, Professor Way Kuo, President of City University, paid special tribute to the joint efforts made by the co-organisers that allowed such luminaries as Professor Yoccoz to visit CityU and deliver such high-level talks.

Dr Jacques Soulillou, Consul (Culture, Education and Science) at the Consulate General of France in Hong Kong, then outlined some of the many academic and research achievements in the highly exceptional career of Professor Yoccoz. He added that the ongoing lecture series presented a wonderful opportunity to build a bridge between France and Hong Kong in terms of high-level research exchanges.

“Throwing a coin is the paradigmatic example of a mechanical deterministic system whose outcome exhibits a random/chaotic behaviour indistinguishable from one where randomness is built-in. The geometric mechanism which is essential in the understanding of this butterfly effect was first discovered by Henri Poincaré in 1890 in his prize-winning memoir for King Oskar of Sweden’s 60th birthday,” Professor Yoccoz said.

After drawing upon the well-known example of the so-called butterfly effect, Professor Yoccoz further explained the central theme of his lecture.

“On the other hand, the Kolmogorov-Arnold-Moser theory developed since the 1960’s guarantees that regular/quasiperiodic behaviour is persistent under perturbations. To determine, even in the simplest systems such as mechanical systems with two degrees of freedom, whether random/chaotic or regular/quasiperiodic behaviour is prevalent, is the major open problem in the modern theory of dynamical systems,” he said.

Professor Yoccoz received the Fields Medal in 1994. This award is, 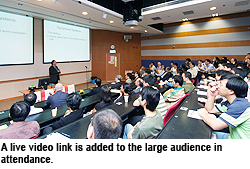 For the benefit of CityU’s students in Shenzhen and Suzhou, the lecture by Professor Yoccoz was broadcast live to the CityU Research Institute in Shenzhen and the University of Science and Technology (USTC) of China - CityU Joint Advanced Research Centre in Suzhou.