City University of Hong Kong (CityU) held a Thanksgiving Dinner on 20 November for donors and supporters in appreciation of their contributions to the University.

More than 100 guests, including donors, friends of the University, Council members, staff and alumni, attended the annual event organised by the Community Relations Committee of the University Council.

Professor Richard Ho Yan-ki, Acting President of CityU, thanked the guests for supporting the University and for enriching the lives of students. "Some of you have also spent your precious time sharing your life experience and wisdom with students. You are influencing not only their three years at university, but also their lives," he said. 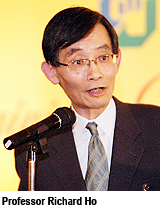 Professor Ho also noted that CityU had made remarkable achievements in the past year. "Our ranking has improved from 154th to 149th in the Times Higher Education 2007 World University Ranking. Only four universities in Hong Kong are in the top 200 and this is an enviable result. In addition, our admission performance is improving and we are bridging the gap with other universities in Hong Kong," he said.

He also pointed out that campus space would be increased by 60% in the next five years, with the completion of the Community College of City University Building and Multi-media Building in 2010 and the Academic-Administrative Building in 2012, catering to the four-year-curriculum. "This will give more space for students to excel," remarked Professor Ho. 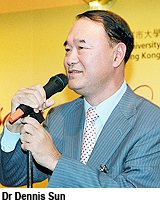 Professor Ho then went on to unveil plans to help improve students' English proficiency and develop their global mindset. "Our vision is that by 2012, there will be one English mentor for every student, and that each student will participate in at least one international immersion programme," he said.

Reporting on the work of the Community Relations Committee, Dr Dennis Sun Tai-lun, Chairman of the Committee, said they had organised three activities this year that were all well attended. They included the farewell dinner for former President Professor H K Chang in April, which was attended by 600 guests, the Parents Day in September which attracted 400 parents and the Thanksgiving Dinner. 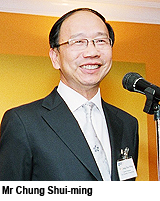 Dr Sun said the more than 100 guests who attended the Thanksgiving Dinner all worked for CityU "because we know CityU will be one of the best universities in the coming years." He added that as Hong Kong became more internatioanlised, CityU had the scope to develop into an internationalised university.

A highlight of the event was the presentation of souvenirs by Council Chairman Mr Chung Shui-ming to Honorary Members and Tree Members of the Alumni Giving Club and Staff Giving Club. The Staff Giving Club "Best Participation Awards" were also presented. Recipients included:

The Alumni Giving Club and the Staff Giving Club were launched by the Development and Alumni Relations Office to encourage alumni and staff to make regular donations to support University development.