Zhang Jing, a Year Two student studying for an MFA in Media Design and Technology in School of Creative Media (SCM) has clinched a Merit Award in a nationwide DV documentary competition held on the mainland for university students. The award demonstrates the SCM’s success in fostering the careers of professionals for the creative media industry. 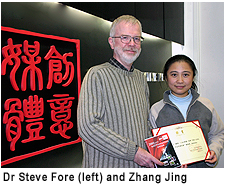 The “2005 Award of Excellent Digital Video Documentary Competition for University Students” was held between March and October 2005 by the People Daily’s website and Cheung Kong School of Journalism and Communication of Shantou University.

Ms Zhang took her bachelor’s degree at Ji Lin University China, with a major in History and a minor in Computer Science. She finished her master’s degree in Chinese Modern History and was admitted to the SCM in January 2005.

Ms Zhang said her film probed people’s perception of different kinds of stairways in , for exam 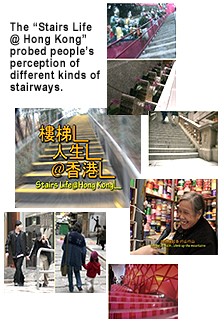 ple stairs in shopping malls or on the streets, and how these stairs affect peoples lives.

“As a combination of space and time, the stairs act as a catalyst for human interaction in and certainly influence people’s lives and shape their personalities,” Ms Zhang said.

Ms Zhang interviewed members of the general public and experts from various fields about their linguistic, geographical, architectural and cultural perspectives towards stairs.

By adding the history of stairs in , this documentary exposes human sentimentality towards the subject.

”Jing’s documentary enkindled a new kind imagination, which is different to that of other winners,” said Ms Zhang Yaxuan, one of the judges and a movie critic.

Ms Zhang praised the award-winning student’s sophisticated interview technique, a crucial factor in determining whether or not a documentary would be interesting.

“Jing is also good at post-production visual and sound effects. At the end of the film, I was delighted to see her using a special way to display staff names. All these points added marks to the creativity of this winning piece,” she said.

Dr Steve Fore, Associate Professor in SCM and Ms Zhang’s supervisor, said because of her status as a newcomer to Hong Kong, Ms Zhang was able to bring a fresh perspective to the part of the city's built environment that long-term resident took for granted.

“She gave also the video a straightforward, lucid, and at times witty visual style that makes it a pleasure to watch,” he said.