About 150 CityU staff and students attended the University Development Forum on Campus Development on 24 November at the Wei Hing Theatre, at which University management presented the latest developments on major capital projects, followed by a Q & A session.

“Our University is truly at a crucial stage of development,” said Professor H K Chang, University President, in his opening remarks. Professor Chang recapped CityU’s recent achievements. He mentioned CityU’s success in reaching the top 200 universities in the world in a survey conducted by the Times Higher Education Supplement and its current ranking among the top 10 Chinese universities, according to a recent survey by the .

In addition, he said many CityU students had won prestigious awards in local, international and mainland competitions.

“We should be very proud of our University and we need to consolidate our achievements to strive for better education for our students,” Professor Chang said.

Professor Chang said CityU belonged to the entire campus community and to future students, and that success ultimately bred success. If CityU could attract better students, it would eventually become a highly successful institution, he said.

Professor Y S Wong, Vice-President (Administration), and Mr Arthur Leung, Director of Campus Planning, then discussed the latest campus development projects. Professor Wong explained that the recent increase in the student population was due to the expansion of enrolment and self-financed programmes.

It was projected that by 2012-13, when the four-year curriculum was to be implemented, the number of students funded by the University Grants Committee would increase by nearly 20%, he said.

According to a recent student survey on space utilization conducted by the University, campus facilities such as the canteen, the Computing Services Centre, the Run Rub Shaw Library, and the indoor study areas and space for student activities were in high demand. In the survey, students said they needed more space for activities.

“To meet the challenges in the years to come we need more space and better campus facilities to meet our Academic Plan,” Professor Wong said. 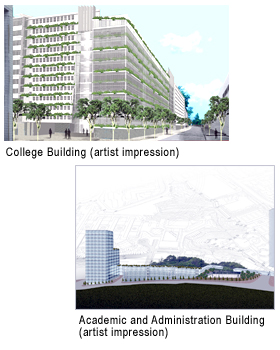 In the coming years, the University is planning the construction of three major buildings to cater for development. These are the Creative Media Centre, the , and the for the four-year curriculum. The University has also submitted a preliminary application to the University Grants Committee for an additional .

Mr Leung gave a detailed outline on the selected sites, physical environment and other background 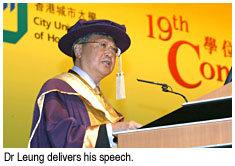 information, including estimated cost and floor area. When completed, approximately 117,000 square meters, or 60% of the existing campus areas, would be added to the University.

Professor David Tong, Deputy President, said he was impressed by the campus development projects as presented. “In about five to ten years’ time, we will have a truly different campus,” he said.

At the Q & A session, staff and students expressed their feelings and raised a number of questions. 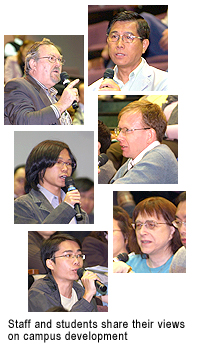 Some members of staff said they were concerned about the heavy traffic on the escalators that linked the University with Festival Walk.

Some students welcomed the development proposals and said they could envisage the benefits the projects would bring. There were concerns that the forum and the proposed projects had not been widely advertised. Professor Chang said repeated EBS messages had notified all staff members and students about the forum, and that the relevant information of the projects had been announced through the University’s website, and publications such as the Bulletin, Linkage and CityU Today.

Staff and students have been consulted

Roman Square
) and that staff and students, including members of the Students’ Union and the CityU Postgraduate Association (CUPA), in fact were members of the Campus Facilities Committee.

Students’ views had been solicited and incorporated into the decision on the conversion of the Amphitheatre into an air-conditioned theatre, Professor Wong said.

Professor Wong provided important background at this point, saying that student representatives at a meeting held by the Committee last December were of the view that the Amphitheatre was underutilized, the environment was too hot in summer, and that the area was inflicted with mosquitoes. They recommended that a solution was converting the theatre into an air-conditioned venue for conducting performances

and lectures. The results of a survey conducted by CUPA supported these recommendations.

Professor Wong also pointed out that the University had built a stage in the covered terrace area of the last year as an alternative venue. Other venues for outdoor activities included the lawn and open space surrounding Phase Three of the student hostels, Professor Wong said.

The importance of open dialogue

Professor Chang thanked staff and students for their care and support and reiterated that the management would work closely with the University Council to decide on the scope and schedule for future campus development. “The University is proud of the support given by staff and students on the issue of campus development. This level of care will prompt faculty and staff members to double our efforts in building a stronger university in the future,” he said.