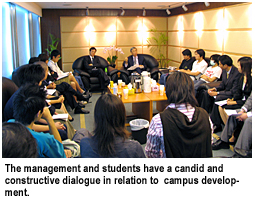 Professor H K Chang, President; Professor David Tong, Deputy President; Professor Y S Wong, Vice-President (Administration); and Professor Lilian Vrijmoed, Dean of Student Learning, met representatives from the Students’ Union (SU), SU Editorial Board and CityU Postgraduate Association, and other students to listen to their views and concerns on campus development. The management and students had a candid and constructive dialogue on 28 October.

The President said he was pleased to meet students face to face and valued opportunities to exchange views with students. He invited the students to speak openly and express what they thought.

He said all major University development plans took time to formulate. It was only natural that people had different opinions and voices. Campus facilities at CityU had reached maximum utilization with an increasing number of students, he said. This was a timely opportunity for the University to embark on campus expansion plans despite limited resources. Professor Chang urged all staff and students to protect the campus environment. He stressed that the need for growth and the need to preserve a green environment were equally important, and the University would strike a balance between the two.

As to what facilities were needed, how to raise money to build these facilities and when, the University had no concrete plans yet. The University Council and management would work together for the benefit of the whole University, aiming to provide a pleasant environment and better facilities for students and staff in a rational, reasonable and legitimate manner, he said.

The President promised that when a more concrete proposal on campus development was ready, the University would consult staff and students to listen to their opinions. He said students had contributed their views to the design of the student residence in earlier years.

The management and the students exchanged views mainly on:

1.  Admission and increase of student number

The students taking part in the dialogue pointed out that the number of students had increased by 10% to15 % per year over the past few years. Would the University set any intake target quota?

The management said no university could expand forever. Universities all over the world have a student population of around 10,000 to 20,000. CityU’s student population had increased to nearly 20,000 and the expansion was expected to taper off in 2006-07. The University would re-allocate resources and re-deploy the use of land to accommodate long-term development needs.

The expansion of the student population mainly fell on part-time evening programmes whereas the number of full-time students remained rather steady. CityU was located at the city centre and there was a huge demand for postgraduate programmes in a knowledge-based society. The University had arranged for some of its programmes to be taught off-campus in order to relieve the huge demand for classrooms on campus.

The University indeed faced funding cuts for associate degree programmes. Funding will dry up in 2008. Funding for taught postgraduate programmes was withdrawn last year. Yet, CityU had demonstrated a high level of adaptability to deal with extra demand and made use of limited resources to launch new programmes. Many self-financing programmes were launched with the support of staff and students. As a result, the student number and the demand for campus facilities continued to increase.

With the introduction of the four-year curriculum, student number would again increase significantly in 2012. The management had applied for extra funding from the Government to carry out new capital projects to cope with the expected increase of student numbers.

2.  Applying for land for campus expansion

The students inquired whether the University had considered asking for more land from the Government or other ways such as renting units in the nearby Nam Shan Estate to meet the needs of campus expansion.

The management said that the University had previously negotiated with the Government for renting or buying public housing units in for student residence purposes. The plan was finally dropped due to the Government’s housing policy. The University would continue to look for other feasible plans.

The management explained that our campus was a piece of marshland 20 years ago. Within a decade, the University turned the marshland into a pleasant area with facilities and plants. The campus area had increased from 11 hectares to the current 19.8 hectares. In 1997, CityU successfully applied for the use of a piece of land at

Cornwall Street
to build student hostels. Since our main campus is located at the city centre and rents in the nearby areas are expensive and there is a scarcity of space for development, it would be difficult for the University to expand in the district.

In order to promote internationalization, the University was committed to offering overseas and mainland students accommodation, and at the same time providing local students with residence places. The management said the University had submitted proposals to the Government, applying for land use between the new Creative Media Building and the existing Student Hostels to build additional student residence. If the proposals were approved, CityU would have more student hostels to provide space and convenience to students. The budget for constructing hostels, however, would be borne by the University.

The students expressed their care for the University and said they would like to have more opportunities to participate in campus development.

The management was very pleased to see that the students cared about the University and encouraged them to help CityU move forward. The management valued students’ views and welcomed them to express their opinions and suggestions in appropriate ways. The University had planned to conduct university-wide consultation on the campus development plan. In fact, students had been invited to meetings to express their views. In addition, the University was preparing a questionnaire to collect opinions and suggestions from all staff and students.

4.  Students’ emotional attachment to certain campus facilities, such as the amphitheatre and the hill-side trail

The students said they understood that there was insufficient space on campus. But some of them said they had special emotional attachment to the amphitheatre and the hill-side trail.

The management said that the University had embarked on an aggressive ambiance improvement project since 1997. Over the years, many improvement projects had taken place. For example, the third floor pedestrian entrance, the University Concourse, and the classrooms and corridors on the had undergone large-scale renovations to provide an enriching campus ambiance. The hill-side trail was another initiative undertaken by the University to provide an enjoyable environment for staff and students. However, it seemed to be underutilized. The amphitheatre was renovated at the demands of students two years earlier with a view to providing better facilities with air-conditioning and other equipments to benefit more students.

In order to preserve some open area for performance or other cultural and arts activities, the University had built a stage at the Covered Terrace near the

University Circle
. Re-deploying resources could improve the campus environment so that more staff and students could enjoy.