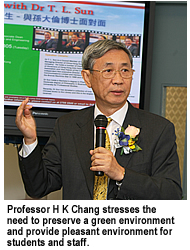 City of is working on a campus development plan to accommodate growth over the next five to ten years. In order to cater to long-term development needs, the University has to study how to allocate resources to expand campus facilities, such as building more classrooms and student hostels.

In making room for development, a few trees may have to be cut down.

But Professor H K Chang, University President, said that the University would strike a balance between the need for growth and the need to preserve a green environment. The University aimed to provide pleasant environment for students to study and staff to work, he said.

Professor Chang addressed concerns raised by a student about CityU’s campus development at a sharing session entitled “Upclose with Dr Dennis Sun” on 25 October at the Run Run Shaw Library.

The Council and the management have been discussing plans for CityU’s further expansion for several months. Professor Chang said the number of students at CityU was increasing and campus facilities had reached maximum utilization. This was a timely opportunity for the University to embark on campus expansion plans, he said.

Professor Chang said all major University development plans took time to formulate. At present, the proposed campus development plan is a rough one. No decision has been made so far. The decision-making process was transparent and the University would consult staff and students at appropriate time before any decision was finalized, he said.

He reiterated that: (i) CityU is facing a shortage of space and this is an opportune moment to plan for campus development; (ii) we have to look closely into what facilities are needed; (iii) the Council needs to discuss how to raise money and when; and (iv) after a draft plan is made, the University will consult staff and students and listen to their opinions.

Professor Chang also said local universities should make the best possible use of Hong Kong’s advantage as an East-West intersection and align with the future development of . Following the belief “Linking the mainland, facing the world”, CityU is actively promoting an internationalized education by recruiting more and more students from the Chinese mainland and overseas. CityU therefore needs more campus facilities, such as student hostels, to keep pace with the University’s development.

In addition, Professor Chang said that the four-year curriculum will be implemented in 2012. To meet this challenge, the University needs to reexamine the existing curriculum and reallocate other resources to cater to these changes. 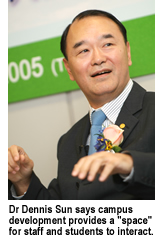 Dr Dennis Sun said campus development provided a “space” for staff and students to interact, trees could be replanted, and campus expansion should address the needs of the University’s development.

Dr Sun has served as a member of the University Council for two consecutive terms and has witnessed the growth of the University. He strongly believes that the future of CityU must align with that of . Finance, tourism, logistics, among others, are important areas for the economic development of .

However, education should not be neglected. He said was a developed international city equipped with advanced information technology. If CityU can provide quality higher education and better hardware and software, it can help attract students from all over the world.

“If we can share the same belief and work whole-heartedly towards our goal, we can succeed,” Dr Sun said.