Thanksgiving dinner gives thanks to donors and supporters 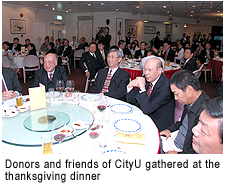 Over 100 guests attended a thanksgiving dinner held by the Community Relations Committee (CRC) on 22 November to strengthen ties with the community and provide the University with an occasion to thank its sponsors and donors for all their support.

The “BRIDGE to Success”, an educational advancement project, was also launched at this event.

Donors, friends of the University, Council members, CRC members and staff made up more than 100 guests at the dinner, the fourth initiative set up by the Community 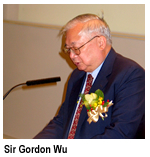 Relations Committee under the University Council to underscore CityU’s ongoing commitment to strengthening ties with the community in support of the University’s development.

Sir Gordon Wu, Council Chairman, thanked the guests for supporting CityU. “With exceptionally fast growth, the University has developed into a fully-fledged university with over 21,000 students and a fine record of achievements in professional education and applied research,” he said.

“We have leapt 20 places from 198 last year to 178 this year in the Times Higher Education 2005 World University Ranking. We have also joined the list of the top 100 technology universities in the world for the first time and we are ranked 90,” he added.

Sir Gordon said he was impressed by the enthusiasm of CityU students for learning and that he shared their concerns about the severe shortage of campus space, not just for lectures and seminars but also for student learning and development activities. He called on donors and friends of the University to 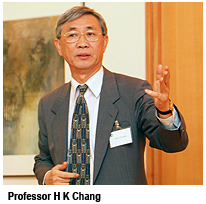 continue their support since campus development and expansion were essential.

Professor H K Chang, University President, said he was very grateful to all the donors and supporters who had given so generously, and he praised alumni and staff for their dedication.

“I might not be a passionate person by nature since I never shout and cheer when I’m watching a soccer match, but I do have a passion for CityU and the education of the younger generation,” he said.

Professor Chang said that having worked in education for many years he was very thankful to be working at a University that maintained such high morale and spirits.

“With the financial and spiritual support of the prominent members of society gathered here tonight, I am confident that CityU will reach new heights of excellence in the future,” he added. 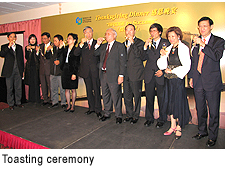 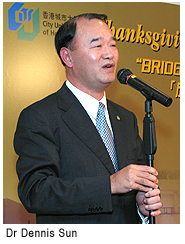 about CityU with Council members.

Dr Sun said many successful people made regular donations to support universities because they agreed education was crucial.

“The more educated and outstanding graduates there are in , the more competitive society can be,” he said.

After thanking Sir Gordon for his generous pledge of HK$25 million to support University campus development and student learning programmes, Dr Sun called on guests to contribute to by supporting tertiary education.

The highlight of the evening was the “BRIDGE to Success” launching ceremony, which was officiated by Sir Gordon, Professor Chang, Dr Sun and Dr Chan Sui-kau, one of the major donors for this project. Mr Andrew Fan, an alumnus and donor, pledged on the spot to donate HK$100,000 to show his support for the project.

The “BRIDGE to Success” project targets successful persons of society. This scheme provides a platform for successful leaders in society to take part in the educational process, not only through donations but also by sharing their success stories. The proceeds will be used to support student programmes including scholarships, internships, exchange programmes and whole-person development activities.

The Students’ Union is actively appealing for HK$20 donation from each student to show their care for the University. Whatever the amount, every dollar demonstrates CityU’s unique caring culture and the University’s commitment to providing an ideal learning environment and quality education for students.

From passion to action: We love CityU!
A dialogue with secondary school principals
Fundraising plans to boost whole person education and caring culture